If there is a theme to second-time-around indie bands in 2015, it seems to be taking on male stereotypes.

There have already been two bands who it’s been quite easy to be sniffy about in the past who seem to have found a deeper level on which to operate. For starters, Spector released a new track yesterday called ‘All The Sad Young Men’, kicking off with an inverted reference to The Killers’ ‘Mr Brightside’ (indie music with some sort of external cultural reference, fuck me!), leading to singer Fred Macpherson crooning one of the best couplets I’ve heard in a while: “boys break like promises / But only behind closed doors.”

Next up Peace, a band whose early promise was slowly pummelled by Major Label Production Sheen on their debut, released ‘I’m A Girl’ this week, which feels like it’s vying to be a direct sequel of Pulp’s ‘I’m A Man’. While neither of these bands’ music is necessarily futuristic, ‘traditional band set-up’ is historically at its best when the front person has something meaningful and positive to say. Thus, the trend away from introverted lyrics, which has been the drag on the genre for the past five years or so, is certainly welcome.

Maccabees faves La Shark are actually only about to release their debut album, off the back of a Pledge Music campaign, but their Point of View Porn-baiting video for lead track ‘World Wide Babes’ couldn’t be more timely.

It’s as awkward as it is funny, and it’s a video which makes you think “I probably shouldn’t be able to understand the references.” The song itself jumps between the spirit of Talking Heads and quirky British pop sensibilities, which has also recently being channelled by the likes of The Fish Police.

These bands sound like they’re looking for a positive way out, and with an audience who are likely feeling under the weather as it is, it’s a sign that indie music in 2015 might not be as gloomy as we were anticipating. Let’s hope it makes a difference. 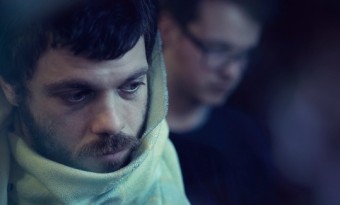 We're pleased to present the first look at Moon Dials, a formidable new collaboration between Adam the Rapper and Tired Arms. Take a peek at the woozy stagger of 'Falter'...
Read More