Junglepussy loves love. Or she hates it. She loves herself. The artist otherwise known as Shayna McHayle thinks other people are jealous of her. She hates her ex-boyfriend. She still respects another one of them.

The truth is, Junglepussy is as confused by and dedicated to a concept, one that Plato found hard to pin down, as the rest of us. In the process of working through this confusion – the contradictions, personal examples and wider feminist-orientated societal issues – she’s produced a snappy underdog of a debut album. Like all snap-at-your-heels dogs, it should not be underestimated.

Pregnant With Success kicks off with ‘Spicy 2013 FM’, a track that sets the album up as a radio programme, a technique utilised for as long as boombox culture has existed (most recently and notably by Janelle Monáe). What this allows her to do is bring in stories from multiple points of view, plus kitchen sink, faux overheard recordings placed throughout the record.

These are wrapped around McHayle’s biting commentary, witty two-liners, and a ferocity that juxtaposes the usually gooey topic she’s playing with. For example, after being somewhat disappointed by anecdotal dating experiences ‘phoned in’ to the show, she snaps: “relationships are more than food and lusty interactions dude.”

It’s hard not to listen to artists like Junglepussy as a man/bloke/boy and not think: ‘I am probably a dick, aren’t I?’ Pregnant With Success is one of those examples of an antidote to all the Pitbulls and T.I.s in the world. If listeners of an XY chromosome design can get past the fact that their masculinity may take a hit or two (and they should), then they’ll be softly brought into the jazzy ‘Somebody’, a lusty, breathless, fully romanticised vision of Spanish villages and massage-orientated weekend afternoons.

On ‘Nothing For Me’ she focuses on distant and failing romancers (“How you gonna say you love me? You don´t do nothing for me”), and manages to produce one the most entertaining one-two crows of the LP: “Your choice in quality too monotonous / Join me on this journey through Junglepussy metropolis.”

While the album up until this point largely revolves around the sort of hip-hop classicism back in vogue since To Pimp A Butterfly was released, ‘Country Boy’ crinkles into a reggae rhythm, soundsystem hollas added in for good measure. “You want me on my period, the jungle juice experiment?” she asks, with a tone that I think means no person should ever, ever, ever ask Junglepussy for that.

‘Get It Right’ and ‘Get To Steppin” moves the tones into more contemporary trap style which leaves me a little cold, although Pussy certainly uses at it as an excuse to add some growl to her delivery.

‘Bout You’ and ‘Dear Diary’ wrap up the album with a turn away from revenge tracks and back towards yearning for coupling. Junglepussy definitely isn’t pushing a ’60s free-love philosophy here, nor is this a female equivalent of, say, Jarvis Cocker’s dirty and sometimes regrettable promiscuity; Pregnant With Success seems a lot more concerned with meaningful loyalty. Something deeper.

‘Dear Diary’ combines jazzy, sampled horns, which call to mind the music of Brian Jackson, and finds Junglepussy at her most enthusiastic. “God made me so perfect,” she declares over a beat that doesn’t sound a million miles away from something Jay Z would sound similarly triumphant over given the opportunity.

It fades into a monologue of someone giving themselves a prep talk while brushing their teeth (in the mirror, no doubt). This record will no doubt give many listeners a bit of a boost as well. It’s generally quite hard to not be engaged and even inspired by artists who sound like they’re trying to have a conversation with their audience, and themselves, rather than doing something they think people will like or avoiding sticky subjects (sometimes literally) altogether.

At the start she promises, “in 2016 you gonna be needing me like nicotine / On your knees where you’re supposed to be.” For someone who references religion in a serious way, something tells me this is as much about reaching some higher artistic plane as it is a double entendre. While her independent ethos might not get Pregnant With Success into many end-of-year lists, it’s a record that should give its creator and her fans something to be proud about. Something to love, in fact. 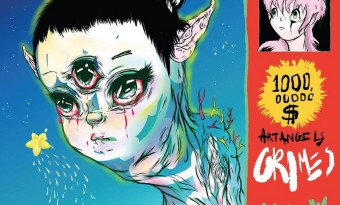 Grimes' Art Angels is a candy-coated pop behemoth, but does it find her simply following the zeitgeist rather than creating it? And does that even matter?
Read More