There are certain people, many people, for whom Cyclops isn’t a fearsome one-eyed monster from Greek mythology but a sanctimonious, laser-shooting twat sporting a terrible pair of wraparounds. Kathryn Beckwith is presumably one of these people, seeing as she initially stole her stage-name from another character from the X-Men, Kitty Pryde, when embarking on what has thus far been a rap career that’s thrown up more questions than answers. Such as: is she amazing? Or just amazingly annoying?

The comic character Kitty Pryde, codename Shadowcat (hey, it’s not as bad as Moonstar or Dazzler), was named after a former classmate of comics artist John Byrne. The real life ‘Shadowcat’ ended up abbreviating her name to K.D. Pryde in order to deflect the attention of obsessive Marvel freaks, although you imagine it’s more litiginous Marvel lawyers who are to blame for her hip-hop namesake’s recent namechange. Still, it’s a testament to the ambiguous lashings of attention she’s enjoyed over the last year that she’s able to carry on simply as Kitty without misplacing the spotlight or being mistaken for a bunch of not-particularly-missed nineties nu-metallers.

Even more impressive is that she’s built that presence despite some people assuming last year’s “Haha I’m Sorry” EP was some sort of piss-take meme they’d missed the memo about. A white, middle-class girl doing cutesy raps about Adderall and riffing off Carly Rae Jepsen? It seemed like too much blog-bait to be true; or, worse, a cynical attempt to follow the downward path taken by Kreayshawn (whose first mixtape, remember, was called “Kittys x Choppas”).

Yet while some people might have a problem with a caucasian Floridian female basically setting her high school diary to a Lil B backing track, the fact is that, from Odd Future to Mykki Blanco, rap music is so bloody weird these days that everyone is welcome. And quite right too.

That said, the need for rappers to appear ‘for real’ is still important in terms of authenticity. Yet with subject matter ranging from sexual rejection to stress rashes via the awkward topic of bedtime incontinence, no one can accuse Kitty of presenting an airbrushed self-image.

On ‘R.R.E.A.M’ she encapsulates the dilemma of craving fame and being unable to handle it with a lyrical playfulness that shows she’s far from some ingénue who’s wandered into the rap game by accident. “I like to be the trending topic, pound key / Even though my hives break out when they hound me,” she rhymes, with the Wu-Tang tribute chorus running “Stress rash rules everything around me / Getting drowsy / Bena-Benadryl y’all”.

Moving onto substances stronger than over-the-counter antihistamines, Kitty’s described her music as being “like when you take acid and you don’t know if you’re going to freak out and jump off a building or you’re going to have a really fun time”. And to be fair, approaching it can feel the same. The whiny “Get outta my room!” that kicks off her breakout track ‘Okay Cupid’ is so grating that I come close to switching it straight off every time, despite an undeniable fondness for its trapped-out hi-hats and woozy pads. Still, like brain-melting Japanese cartoons featuring cheerful anthropomorphised sea creatures, what initially hits you as try-hard cutesiness can occasionally come up smelling like strawberry neskwik-cut MDMA.

Still, while the EP that spawned that internet hit was a pretty patchy affair – its nadir being a horrible guest verse from Riff Raff, who raps like a shit Texan version of Ninja from Die Antwoord – this year’s “D.A.I.S.Y. Rage” is a much more solid affair. Despite having a title so predictable you half-suspect she’s satirising herself, its opener, ‘UNfollowed’, is probably her finest moment to date, featuring a mellifluous rhythm that could easily have fallen out of Gold Panda’s beat box (hey, it worked for Charli XCX), with an uptempo vocal that showcases increasingly confident delivery.

The lyrics are generally much more entertaining too, particularly on ‘Skrillionaire’ which sees her asking “Why you wanna fucking undercut me like I’m Skrillex’ hair?” before sticking on some “Black eyeliner / So I see with eyes of Horus / In Florida, I spit on all the visor wearing tourists”.

The backing tracks are generally brilliant too, particularly the combination of splintered harp and farty bass on ‘NO OFFENCE!!!!!’ (because obviously a Kitty diss track has to be pre-faced with an apology) while ‘Scout Finch Bitch’ features the first ever guest, Antwon, who’s actually improved one of her tracks, not least when Kitty responds to his declaration “I’ve got cocaine on me” with a comically nervous “You’re gonna get me in trouble…”.

It’s that awkwardness, indicative of someone with talent but not enough confidence to ignore harsh Youtube comments (nor resist reading them), which, even when hammed up, makes Kitty such an intriguing prospect; much more so than her background or her Tumblr or her ridiculous song titles. It’s expressed best when she reveals, “I grew up on the shy side, the free wi-fi side / The O C D side, you know it’s me: Pryde / But I don’t really have much of that so / I’m blushing while I’m running the show”.

PSY showed last year that something that’s initially incredibly irritating can provide plenty of sustenance when investigated more deeply (in his case the satirical elements of the song and his past as a troublesome iconoclast spring to mind). There’s little more satisfying than finding substance underneath a silly exterior. While everyone I’ve played Kitty too has found her annoying at first – including me – the more you listen, the more you find to be fascinated by. Or repelled by. It’s all a matter of taste.

In the X-Men, Kitty Pryde’s super power was the ability to become intangible. Her musical namesake feels the same way – like if someone turned off the internet she’d cease to exist. Having extended my goldfish-brained, internet-decimated attention span for longer than usual before coming to a decision, I’m glad she does. She may thrive on some of the worst by-products of the world wide web – uncontrollable hype, obsessive self-analysis, dizzying cross-pollination across endless social networks, and not least those annoying mac keyboard shortcut icons – but if you ignore those superficial irritants, the music is worthy of attention. 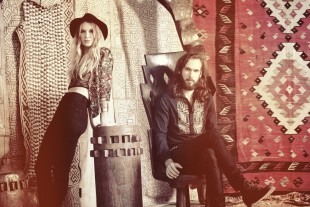 Lord knows what type of band my Sister and I would've formed when we were kids. Probably something along the lines of Whitney Houston fronting Madness with a touch of hardcore jungle....
Read More