London’s Stoke Newington is the sort of place you could easily never leave. From an early morning fry-up to a 3am piss-up, and with plenty to occupy you in between, as long as you’re able to avoid the midday buggy derby on Church Street you’re pretty much sorted.

We’re not sure Tense Men have ever left. We were first alerted to the three-piece’s existence by a Stoke Newington resident who knows her shit, and shortly afterwards featured their egg-themed video for ‘RNRFON’, a backwards stroll shot entirely on Cazenove Road. Then we saw them play live literally around the corner in The Waiting Room, underneath The Three Crowns on Church Street. It’s got to the point where it would be a bit disconcerting to see them anywhere else. Even continuously blasting out their new EP ‘Where Dull Care is Forgotten’ a full three miles away from Stokey feels a little weird.

Still, blasting out continuously is what it’s been doing. While there are a few bands knocking out tight, knotty noise with a discernible kraut/punk influence at the moment – TRAAMS, Girl Band and The Oscillation being particularly fine examples – Tense Men may just be the best bunch going. ‘Where Dull Care is Forgotten’ is full of the sort of nervously explosive energy that suggests a diet of nothing but cheap Red Bull knock-offs from the local corner shop.

In fact, the taurine fix needed to produce the two-minute blast of opener ‘Stages of Boredom’ would probably necessitate cracking out a gigantic, swollen Ox’s bollock and sticking three straws into it. Like a swivel-eyed take on ‘Tony’s Theme’ by the Pixies, it’s main refrain is probably even weirder: “Iron those creases! Death will come faster!” Now that’s the sort of advice I’d love to see Gok Wan giving more often.

The aforementioned ‘RNRFON’ is still a blistering panic attack of a tune, and along with the similarly repetitive title track sums up their multi-pronged ability for putting the listener into a trance. The former is like being hypnotised by endless headbutts, the latter like being hypnotised by the endless ingestion of benzodiazepines. In both cases the haze, fittingly, is never completely disassociated from the surrounding sonic tension.

Elsewhere, both ‘Lie Heavy’ (Desperate Times)’ and ‘Nonentities’ revolve around discordant chugs that feel like random chunks removed from early Joy Division songs. If there’s an opposite of sun-dried which isn’t moon-dried, the results feel like they’ve been subjected to that treatment – dim lightbulb-dried perhaps.

Ironically, closing track ‘Opiate Glow’ is probably the rowdiest track on the record, bringing everything back full circle into triple-time fury. It’s a dynamic end to a dynamite EP. The members may all individually be moonlighting from Omi Palone, Sauna Youth and Cold Pumas (whose ‘Persistent Malaise’ we raved about when it came out), but hopefully that won’t mean this line-up gets neglected. Tense Men are too good to be a side-project, and too good for Stoke Newingtonites to keep all to themselves… 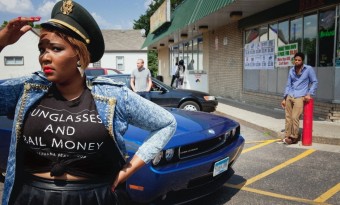