When a record is as immaculately constructed as Ghost Culture’s debut album from earlier this year, there’s always a niggling fear that it’ll be almost impossible to recreate it in a live environment. Or at least without having a meticulously pre-programmed laptop set-up, which always risks losing the sense of spontaneity that can help make a truly great live show.

In order to tackle that conundrum for tonight’s gig, James ‘Ghost Culture’ Greenwood is at least blessed with a venue capable of satisfying most sonic demands made of it. It also transpires that he has a plan to retain spontaneity too, with a whole new live set-up. Before all that, however, there’s the not insignificant matter of Kelly Lee Owens to attend to.

I must admit to not having heard of Owens prior to tonight, although some pre-gig googling revealed I had actually heard her – she co-wrote and provided vocals to several tracks on Daniel Avery’s devastatingly acidic Drone Logic album. A few minutes on her SoundCloud is enough to convince me that her set will be worth foregoing the first half of Arsenal vs. Spurs’ match taking place at the same time – and indeed it is.

Owens’ work has a similarly sleek, 808-friendly acid-pop sound to Ghost Culture’s (they’ve also worked together in the past), although she’s assisted here by a full live band including an unlikely cellist. Her compositions have an immediate appeal despite a classily restrained approach, and you’re left with the impression that Owens’ may have a debut record in her that could even surpass those by her mates Greenwood and Avery. Hopefully it won’t be long before we get to find out.

We spend the time before Ghost Culture’s set hanging back to watch the second half of the North London derby via dodgy mobile phone stream, which turns out to be an error – Corsica Studios fills up so much in the interim that we find ourselves beyond the venue’s auditory sweet spot when he takes to the stage, thus depriving the slow opener of ‘How’ loses some of its subtlety. Luckily the four huge bulbs on stage make a (literally) blinding visual impression right to the back, while the live drummer accompanying Greenwood adds an unlikely swing to ‘Lying’.

It still feels like a low-key start to the set, although the appearance of single ‘Mouth’ ratchets things up a notch. The live version feels much more psychedelic than the studio one, although the acid licks and vocal melodies are a little indistinct – not that it matters much when it shifts into a funky breakdown (and we manage to move a little closer to the front).

‘Glass’ also benefits from a storming instrumental section, and it generally seems like the set really comes alive when Greenwood (who, incidentally, looks like he’s moonlighting from a flowered-up ’60s beat combo) is at the controls rather than the mic. His hammering of the drum pads on ‘Arms’, for instance, is so terrifically tight that it’s only when he starts mixing up the rhythms that you can be 100% certain that he is actually playing them live.

‘Giudecca’ has the unexpected effect of making my gig companion G feel like he’s “in a submarine”, with some Afrobeat flourishes from the drums keeping the vessel buoyant. It’s ‘Answer’ that really crackles though; while Greenwood’s enthusiastic stage presence doesn’t always feel entirely convincing, here he manipulates the crowd expertly both through physical exhortations and dynamic control. For a second the energy and excitement in the room makes it feel like we’re at an early Chemical Brothers gig, and it joins the second episode of This Is England ’90 as recent things to have made me nostalgic for pilled-up rave days.

It’s an unsurpassable way to end the main set, which is perhaps why Greenwood takes a different tack on the encore by sporting a guitar for the slow waltz of ‘Glaciers’. It’s a bold move, although not as brave as then producing a saxophone for a recital of a new song, ‘All Is Well’. Luckily it turns out to be one of the best songs of the night, and something of a new wave banger. The drums also sound particularly brilliant on both songs, helping to insulate the encore against what could’ve been a jarring change of pace and instrumentation.

‘The Fog’ is an obvious choice to finish the night off, what with it being the closing track on the Ghost Culture LP. There’s a palpable sense of satisfaction from the stage as it ebbs and flows, the sort that comes from a new live set-up going off without any obvious hitches; and several significant triumphs.

With his new approach, Greenwood doesn’t attempt to perfectly recreate the Ghost Culture studio sound – although all the most effective elements are retained – but instead manages to tweak it for a live environment and, crucially, ensures a sense of spontaneity is always present. Mission accomplished. 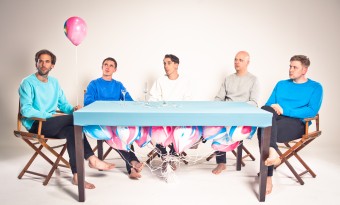 Acclaimed five-piece Outfit got off to a slow start when they brought latest album 'Slowness' to the London stage. Did they end up moving through the gears?
Read More