Summer may be over, but there’s no reason to be sad about it when Single-Minded’s still about…

It’s been many, many years since I heard anything from frosty French producer Colder, but it’s good to hear he’s still adept at dishing out deadpan vocals on sturdy, New Order-style tracks. ‘Many Colours’ seems as minimal as his usual efforts, but there’s a lot of interesting stuff squashed beneath the surface – a bit like someone’s pushed a trolley into a lake but forgot to take all the expensive shopping out first. Kier Wiater Carnihan

Dråpe – My Friend The Scientist

The breezy breakbeats and indie-pop melodies elevate ‘My Friend The Scientist’ above the dreamy/dreary crossroads that so many bands seem to be struggling to navigate at the moment. Norwegian five-piece Dråpe are like the paisley curtains I picked up off Freecycle recently – only psychedelic in a kitschy aesthetic sense, but very pretty nonetheless. KWC

Another trip-hop renaissance tune; must be the onset of autumn making people a little melancholic. The breathy smutty lyrics actually work pretty well here and take it beyond the pastiche it would feel like otherwise. NB

‘Lucky’ is one of the slinkiest tracks on Ghost Culture’s debut album (which happens to be one of our favourites of the year so far). A little too slinky for mischievous old Matthew Dear, who’s decided to disrupt the original’s catwalk-friendly groove by slamming a thudding beat right onto the catwalk itself, and tearing the rest of the track into tatters. Nice. Even better, you get a free download of it when you book tickets to Ghost Culture’s Corsica Studios gig next week… KWC

Jacky Winter feat. Brendan Huntley – Half Of It

Liking this… as if Mac DeMarco had harder edges. Doesn´t quite demonstrate the song-writing capabilities of King Slacker, but the sliding off-key notes add a really appealing wonky slant to the DIY proceedings. NB

Jimmy Whispers – I Get Lost In You In The Summertime

Jimmy Whispers makes the sort of music that, if you put it on in a room full of strangers, most of them would probably assume it was your own demo tape. Which is no bad thing if you’re a fan of the sort of lo-fi, bedroom balladry that he specialises in, and this is a particularly nice, low key lament. It’s a little tear-stained, but offhand lyrics about irritating groups of kids playing outside stop it from getting soggy. KWC

I jump over and over the same fence regards Kurt Vile so often that I feel like some sort of confused Americana show-pony. This track has me back on the ‘Vile is vile’ side of the fence, largely because it sounds a bit like he’s covering Red Hot Chili Peppers or the bloody Spin Doctors. KWC

I thought that Kendrick sounded angry on To Pimp A Butterfly, but here Nolan The Ninja turns it up a notch. The unrelenting vocals punch through a lush, Brainfeeder-like beat – if you like your hip-hop sans hook and with a grizzly old-school backdrop you´ll find plenty to enjoy here. NB

‘Robbing Millions Premiere ‘Warder’ Video On Pigeons + Planes’ is the subject line of the PR email this came with. Yeah it was, but it turns out this grand promotional event actually occurred OVER A YEAR AGO. I have no idea why this is suddenly being pushed now; if I’d written a track this good then I wouldn’t have waited a year to start telling people about it, that’s for sure. KWC

Saul Williams – Horn of the Clock-Bike

Does anyone sound better rapping over piano than Saul Williams? Maybe Chilly Gonzales, but then he’s an actual concert pianist so it’s probably not a fair comparison. Regardless, for some reason Williams always sounds amazing alongside a piano refrain and that continues to be the case here, on a track that sounds a little bit like Young Fathers if they just relaxed a little bit. KWC

The verses of ‘Party Favour’ are so sexy they don’t even rubber up before getting all nasty in your ear drums. Unfortunately the flimsy chorus kind of spoils the mood a little bit, but still… phew. KWC

A pretty, cut-up kaleidoscope just like mama (aka Gold Panda) used to make. This feels a little bit like it might fall apart if you turn your head too sharply while listening to it, but despite a certain lack of substance it’s an undeniably comforting way to end the week… KWC

Single-Minded: Black Butter's Syv are 'Knockin' at the door... 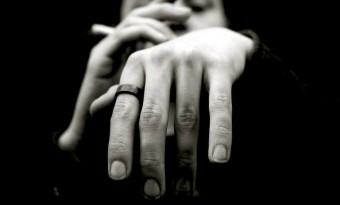 Is this the best week of singles since we started this column? Listen to the latest music from Syv, Le1f, Nicolas Godin and Fresh Snow, then decide for yourself...
Read More