There is something mildly comforting to know that a new Low record is being released. Even after two decades – Duluth’s finest are now on album number 11, out Sept 11 – it’s still something I greatly look forward to.

You’d think after all this time and all these releases that there wouldn’t be much left to explore, but on Ones and Sixes they prove there’s more than enough room to manoeuvre within. Singer Alan Sparhawk was pretty succinct about how this album came about: “In our 20+ years of writing songs, I’ve learned that no matter how escapist, divergent, or even transcendent the creative process feels, the result is more beholden to what is going on at the moment.” And boy, it sure shows.

Take ‘Spanish Translation’, which I am adamant ranks up there with their finest songs. Yes, up there with ‘Two-Step’, ‘Sunflower’, ‘July’, ‘Dragonfly’, ‘Walk Into The Sea’, ‘Violent Past’, etc., etc. A bitter-sweet lullaby with typically bleak lyrics and a bombastic chorus, its synths swell louder and louder until instantly cutting back to reality while Sparhawk growls, “Everything once within reason, falling away like the dust”.

‘Congregation’ follows suit into the classic Low folder. This time Mimi Parker takes lead vocal duties over a creeping bassline and rat-a-tat beat that seems to plunge deeper and deeper into the abyss. She sings “The implication is its own device, in the middle of a salient fight / Sometimes congregation can’t be satisfied, can’t be bothered with the ways and whys,” over jagged guitars and distressed noise, and there’s a moment when you realise you can’t imagine a Low live set without it any more. I can imagine the die-hards demanding it when they return from an encore, as is a staple whenever they play London especially… definitely not annoying.

The band seem at ease, masters of their trade. They’ve hit another gear since Drums & Guns (perhaps my personal favourite Low record – yes, more so than Things We Lost…), after a turbulent period for the band. They seem to have unshackled themselves following C’mon and The Invisible Way, focusing on the moment, the here and now, from the heart as Sparkhawk noted above.

Ones and Sixes seems to operate with an underlying darker, more cynical tone. The song titles like ‘Lies’, ‘No End’, ‘The Innocents’ and ‘Kids in the Corner’ certainly suggest a continuation of the downbeat, sombre numbers we’ve grown accustomed to, with the eerie drone in ‘Gentle’ setting the tone. the vocals sound icy and distant and disconnected: “It doesn’t have to end this way”.

But it’s not all lovely doom and gloom; there are elements of shoegaze and ’60s pop. ‘No End’ could be a Motown hit, only slower and dreamier and with slabs of walls of sound dripping from the edges, and ‘What Part of Me’ could have been a cut from Drums & Guns with its drum machine beat – only performed by Slowdive. It’s euphorically upbeat if you listened to it without paying much attention, but on closer inspection it’s classic Low, their trademark dark lyrics hovering above lullaby melodies. ‘Kid in the Corner’ creeps as the haunting harmonies quiver from Sparhawk and Parker. It chills and soothes. It builds and builds, aching to let loose but doesn’t. Intentionally so, as it slowly fades to silence.

The album finishes with a triad of songs which probably form the finest closing streak on a Low record, period. ‘Lies’, another which could possibly rank up there as an instant Low classic, sounds gloriously positive despite Sparhawk hissing in stark, wonderful contrast: “You say you must be going out of your mind / And I can see you when I look in your eyes / You’re always talking on the end of your tongue / And sweep the ashes underneath the rug.”

‘Landslide’ chugs away with a metal-lite riff before soaring into a cacophony of reverbed textures which sound as good as anything Sigur Ros did during their “( )” peak period. Parker’s vocals coo, like a siren calling in the ships for what seems an eternity. And you never want it to stop.

Ones and Sixes closes with ‘DJ’. Personally speaking, Low’s album closers are among their strongest assets and this is no exception. It sounds utterly menacing as Sparkhawk pontificates: “Our fathers said what their fathers said, our mothers did what their mothers did.” And so it goes. Low have established that despite retaining their trademark sound, they’re constantly progressing sonically while retaining their evocative and vivid lyrics, harking to various moments of their past but simultaneously looking forward. I might be a bit hasty saying this but it’s already probably my favourite Low record, and I can’t wait to see where they go next. 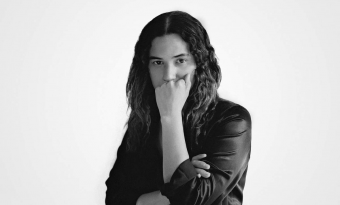 Empress Of's debut album is the most concise, cohesive and immersive narrative-pop record since Lorde’s debut, and it's a great self-help guide to boot...
Read More