A few months ago we ranted about the slightly cloying self-satisfaction of OK Go perennially out-doing themselves with their music videos, and it seems we’re not the only ones to be irked by their insufferable Zero-G grins. AJJ’s deadpan parody of those technically impressive but oddly soulless videos is right on the money, although gentle enough that you imagine OK Go would probably see the funny side too.

The video for Cumhur Jay’s ‘On & On’ sees director Akihiko Taniguchi putting himself in the frame – several times over in fact. The groovy yet glitchy visual is the perfect match for Cumhur Jay’s music, and makes you wonder whether Taniguchi’s dancing (and Tai Chi) in real life is as good as his avatar’s…

Austrian avant-garde filmmaker Peter Tscherkassky’s 1985 short Manufraktur is refashioned to fit Driftmachine’s voyage ‘To Nowhere Pt. 2’, and it makes for a great foil. The sketchy, flickering edits of automobiles icily complement the restrained industrial electronics of the track, and have got me pondering a purchase of Driftmachine’s recently reissued debut album Nocturnes…

Hard times have hit home for Action Man (not to mention his girlfriend) in this hilariously DIY video by Kentish upstarts Eat Me. The plastic hero’s better days are clearly behind him according to ‘Boy’, which sees him eating leftover spaghetti while watching Countdown next to an overflowing ashtray; before a cheeky flutter seems to revive his fortunes… or does it? Great outtake at the end too.

Ever wandered into a line-dancing session while in the middle of a heroin and Guinness binge? Well obviously we all have, but none of us had it captured for posterity as brilliantly as this. Sadly the video for ‘Orlando’ was shot just days before the tragic mass murder that took place in Orlando itself, a fact which Exploded View have solemnly noted:

“In the wake of our pain, when some have downplayed the chosen identity of the victims, while others may have concentrated solely on that, it is important to remember that this affects all of us. Whatever happens, dance floors should continue to be a space for freedom of expression, for life’s simple pleasures and a safe haven for so many communities around the world.”

FIDLAR videos are usually good value and so it proves on ‘Punks’. Clearly the product of minds that have spent a lot of time swamped in skunk smoke while watching schlocky horror and playing computer games, the video has a brilliantly lurid and gory ending…

French rapper Ichon takes on the issue of police brutality headfirst in this unsurprisingly violent video. Interspersed with tributes to people who’ve died in police custody worldwide, ‘Fils de Pute’ (no translation necessary there) avoids feeling predictable or exploitative thanks to the animated and magnetic central performance of Ichon himself.

Another bloody and disturbing video – we’ll lighten up in a second, honest – Matt Halsall’s video for Lil Silva sees actor Charley Palmer Rothwell imprisoned in solitary confinement (apparently on the set of a Kubrick film). The poor lad’s diet of baked beans and psychoactive drugs is presented as not being entirely healthy for him, although frankly it never did me any harm…

The heavily stylised video for ‘Car’, all crisp white cotton and ’80s fetishism, would almost be annoying if it wasn’t executed so well. Frankly there aren’t enough bands out there with matching costumes and tongue-in-cheek dance routines (although admittedly we’ve featured two in just this one column), so thumbs up for Porches and director Daniel Brereton.

I hope you enjoyed that brief respite, as we’re back into disturbing territory here. Or at least I thought this tale of vodka, screaming, flares and blood-stained boozers was disturbing the first time I saw it; now I reckon it’s probably just what most of Iceland looked like after they beat England at the Euros.

In amidst the many iconic deaths 2016 has dealt thus far, one important name seems to have been largely overlooked: Terry Brain. Bristolian Brain was the animator and co-creator of cult kids’ TV show Trap Door, and as such made an indelible impression on the supple clay of many British children’s brains during the late ’80s and beyond. I have no idea if Wand are aware of Terry Brain or Trap Door, but the fact the video for ‘Passage of the Dream’ features a claymated skull not unlike the character of Boni means it’s good enough for me. 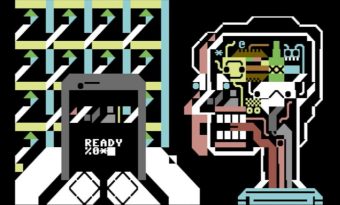 The video for Mitch Wade Cole's 'Jumpin On Blocks' is sure to trigger a nostalgia rush for anyone who owned a Commodore 64...
Read More