Praise be to Lorely Rodriguez, aka Empress Of, who reminds us that if everyone wrote decent tunes we’d all be a lot happier.

Initially catching attention with her one-minute, colour-themed YouTube videos, Double Denim/Terrible Records quickly signed up the Honduran-American for her debut EP, Systems, which was a promising start to the glacial synth player’s career, even if the tracks sounded more like ideas than finished articles. The Spanish/English bilingual element of that EP (sadly missing from her debut LP Me, which is pretty much my only, unfair, complaint about it) likely helped her grab the attention of new co-label XL, who released the continent-straddling Ibeyi project earlier this year and no doubt helped add a bit of Hollywood gloss to Rodriguez’s bedroom productions, turning this from niche indie release to big hitter potential. All that gloss wouldn’t mean much though if Me didn’t have any songs to show off, and this is where the Empress Of project really succeeds.

“Everything I do is because of you,” Rodriguez croons repeatedly over a bed of dense synth production and crisp high hats on opening track ‘Everything Is You’. For an album that sounds like it’d be self-obsessed, it’s a surprisingly third-person record. Throughout, lyrics reference Empress Of in relation to situations with other people, from being “taken for a ride” in the entitlement-baiting ‘Water Water’ (“water is a privilege / Just like kids that go to college”), to when she’s channelling her inner Jarvis Cocker with the innuendo-laden ‘How Do You Do It’ or the dedicated persona she reveals on the stomping ‘To Get By’.

If you were wondering what particular royal lineage Empress Of is of, then the album title would be the main give-away. By the time we reach recent single ‘Kitty Kat’ the story takes a turn: “let me walk away,” she pleads to the unknown entities which have so far been the focus of her story, “I’ve fallen for myself.” By the time the final dream sequence, ‘Icon’, comes around, her transformation from being wanted to be needed to being self-sustained is complete (“When I’m just in a room with the lights on… keep the lights on for my sake”). The surprisingly uplifting feeling this isolation exudes was no doubt induced from the solitary confinement she experienced when creating the record, in a particularly quiet part of Mexico.

The self-help rhetoric (“I just need myself” being the album’s focal mantra) is all backed up by some pretty beefy production. At points the spectre of Hot Chip’s ‘Flutes’ appears, lending a bit of summer club atmosphere, while fans of melodic left-field pop acts like Metronomy will find plenty to enjoy. While she doesn’t stray away from festival-friendly moments, the mid-paced ‘Standard’ calls to mind last year’s chart-invading Odesza record too.

She can still play it indie though. The subdued and sensual ‘Make Up’ reminds me of the underrated Minnesota three-piece Now, Now. Her vocals are warm and charismatic, thankfully never resorting to the loud but ultimately unimpressive style that dominates the charts at the moment.

Coming in at around thirty-five minutes, and with every track bouncing along at a decent pace, it’s a snappy record that doesn’t leave you waiting around for too long. It’s the most concise, cohesive and immersive narrative-pop record I’ve heard since Lorde’s debut. If Empress Of isn’t stealing the show at every festival this time next year, I give up trying to work you people out. 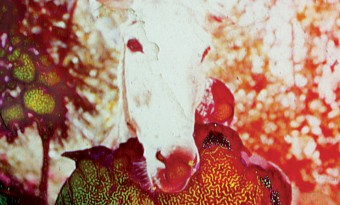 Having attracted some wider interest following his acclaimed collaboration with Suuns earlier this year, the second Jerusalem In My Heart album demands your full attention to unlock its secrets...
Read More