It’s really quite nice to be able to see a drummer’s ribs while they play. Especially when they are the type to play with their whole body, enthusiastically hurling themselves around their kit. Above the torso this Nordic Giant is crowned and masked in feathers. This is part of the schtick; attempting to out-Scandi the Scandinavians by appearing as woodland creatures. Woodland creatures with trumpets, drum kits, stage pianos and a reasonable chunk of an orchestra. Woodland creatures with a top notch video editing suite.

The suspension of disbelief is tricky, but it doesn’t actually need it. Nordic Giants are multimedia in the sense of appearing to be at least eight different things at the same time. They are as much post-rock short film curators as they are a band.

They are of that type of post-rock that is essentially an attempt to apply the dynamics and drumming of rock to the orchestral palette; much in the same way that George Gershwin tried to bring jazz into the orchestral oeuvre. Christ, I’ve just compared a subset of a genre to Gershwin, what the fuck is wrong with me? I’ll try and salvage this somehow.

There is a clear theatricality on show though. The music falls more into loud, louder, loudest than it does the typical quiet/loud thing, although there are brief moments of respite. I can’t help but think of it as all the climactic moments from eight or nine Sigur Rós gigs taken from their context and stitched into one new show. The part orchestra, unique to this homecoming show, emphasises and adds depth to an utterly maximalist approach to making an emotionally dense racket. The sense of surging flight is palpable throughout. It quickly becomes clear that if the music drops to nothing for even a second, it probably means a rage of drums, horns and strings is about to pound relentlessly into you to make up for it. The repetitive dynamic tricks never stop working. The music is tremendous, elegiac and uplifting.

Which only makes the short films it accompanies more unsettling. I could maintain distance from the dystopian Ferrero Rocher advert, in which Russians and robots vie for control of the chocolate box from Hellraiser, but only because it ended with a motorcycle chase. But things quickly become distressing. I don’t want to spoil the tale of the smug urban family that go diving in a country lake, but suffice it to say that it is unnerving, violent and surreally upsetting. It’s only made more distressing by the fact that the music almost celebrates the violence; lauding it with fanfares and parades of drums. Catharsis is clearly the aim of the game here, a goal that too much live music fails to reach for. This is a gig attempting to make you feel, powerfully. The elfin demons on stage are taking you somewhere dark and hideous, and asking you to revel in it. For your own good. 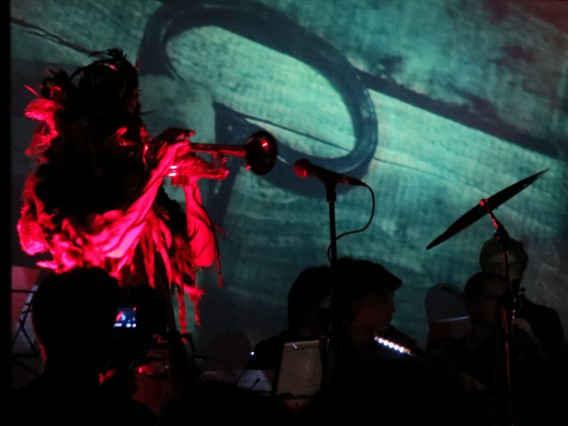 Occasional bursts of archival revolutionary tidbits occasionally turn this emotional battering into something faintly political, but the prime sensation is a crowd of people lost in brutal introspection. This is not a party. This is a void you can stare into. It may stare back.

The harrowing visuals ease into a more abstract mode for a while, and I have to applaud the curation. The demonstration of why you shouldn’t paint mandalas on your face is of note, as is the doodled, montaged history of animation. There is beauty here, as well as discomfort. I start to freak out when it appears that pins are being pushed through a computer generated throat, but I think this is just my own weird anxieties and phobias being brought to light. I am repeatedly dazzled by the explosive visual journeys.

Musically, the occasional canned vocalists (presented trapped in a box at the front of the stage) are the main duff note, adding an unnecessary weight to one side of a delicately balanced structure. It hams up the musical drama ever so slightly in a way that makes it harder to gel with, but it’s easy enough to ignore. There is more than enough here to get lost in.

As the final video, another monstrous urban dystopia, starts to roll, I am trying to mash together a tenuous description. It’s like David Lynch directing an episode of Borgen with a script by Haruki Murakami. I am feeling unjustifiably smug when the world appears to fall apart around me. First, I’m pushed back to make way for a man who is fleeing to the side of the room. As the music subsides for a few moments, our corner can only hear the crashing flood of vomit hitting the floor. The crowd promptly swells away from him. A ripple of disgust distracts everybody from the inevitable roaring peak of the music which promptly makes two women, one about two rows in front of me and one two rows behind, physically collapse. The performance is built to overwhelm, and it really does.

I don’t think it’s a coincidence that it’s not long after a common form of physical torture is briefly represented on the screen, that people start to panic. I briefly become worried that symptoms of a dark, brutal illness are going to sweep the crowd. Or even worse, maybe I’m actually wedged in the centre of a performance art happening.

But it’s neither. Just an overwhelming performance. Incredible playing, a beautifully arranged orchestra, and an alienating cinematic accompaniment.

It becomes clear that one of the people I came with actually ran away during the show. The remainder fall into a series of agog, supportive group hugs as the credits roll. The brutal epilogue to one video elicits nothing but hysterical laughter.

I’m surprised that what could easily have been some derivative emotionally blackmailing orchestral prog turns out to be such a richly unsettling experience, but I’m glad. The music was perfect: inspiring and engaging, but the whole was miles beyond that.

The Nordic Giants are willing to take you on a journey. It appears they took a few members of the Brighton audience just a little too far. I leave fragile, overwhelmed and alive. I am more than happy with that result.

For the sake of reassurance, the sick guy disappeared backstage with someone faintly official looking, and the two people that fainted got up pretty quickly. I’m almost certain that no humans were harmed in the making of this review. 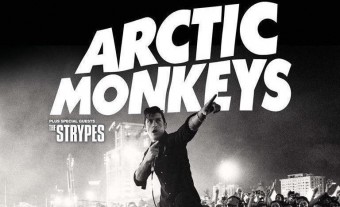