‘Why Wait?’ and ‘Why Does It Shake?’ are just two of the questions asked by this week’s singles. Kier Wiater Carnihan and Nicholas Burman attempt to answer…

Dooks is not only a mate of mine but also an occasional contributor to this site, so there’s no point in even claiming impartiality here. Luckily the quality of ‘The Mellow’ speaks for itself. Seeing Dooks play and sing live is a gobsmacking experience, and her latest EP is the next best experience, recorded live in single takes at Goldsmiths Music Studios. If anyone else in 2015 possesses anything approaching her atmospheric ability or dynamic touch, I want to hear them. Kier Wiater Carnihan

I’ve been touting Norway-via-London’s Farao on The Monitors for a couple of years now, so it’s a relief that her debut album is finally almost here. Not that ‘Bodies’ increases the anticipation all that much. A song that seems as riddled with adolescent confusion as the accompanying video, the impressively dexterous snare sections only partially disguise the fact that the tune isn’t that strong, making it a rare Farao release where the rhythm outshines the melody. KWC

Really enjoyed this one from NYC’s Nick ‘Hot Sugar’ Koenig – PC Music textures but with a much more grimacing undercurrent and beefy build up. Sounds like a track from OK Computer being put through an 8-Bit modulator, the squealing melody perfectly juxtaposing the slow-mo grime beat. Nicholas Burman

While it didn’t quite make it into our most disappointing albums of 2014 list, for me Jane Weaver’s The Silver Globe was a long way behind the golden tones of her previous record, the immaculate ‘The Fallen By Watchbird’. Having said that, this single has really grown on me, and the way it mixes her more psychedelic leanings into a ’90s trip-pop style is surprisingly effective. Good enough for me to give The Silver Globe another go in fact… KWC

I’m in the ”Video Games’ was decent but that’s about it’ camp when it comes to LDR; she’s clearly talented, but so much of her material seems to be more concerned with aesthetic over everything else. I actually like the restrained romance and flushed strings of ‘Honeymoon’ a lot (despite the dodgy lyrics), but it still feels like yet another audition for that David Lynch soundtrack sync that’s probably never going to arrive. KWC

The krautrock-y beat is perfectly pleasing and the song itself is very pretty, but the vocals are so throaty I never really get a real sense of passion behind them… NB

Meridian Dan – In The Street

Meridian Dan was a pretty unlikely figure to give grime one of its biggest hits in years, but that’s exactly what he did with 2014’s ‘German Whip’. With the genre since reaching arguably some of its highest points since, not least his old mate Skepta’s ‘That’s Not Me’ almost immediately afterwards, he deserves praise for that. Not so much for ‘In The Street’ though. The bruising bass of the beat is decent (even if ripped off Kanye’s ‘New Slaves’), but the flow and hard man clichés seem forced and unconvincing. KWC

Protomartyr – Why Does It Shake

“False happiness is on the rise,” deadpans Joe Casey at the start of ‘Why Does It Shake’, although he never seems in any danger of forcing a smile himself. Protomartyr have returned as passionately angry as ever, with plenty of Pere Ubuisms sparking off the first half of this single before it shifts into a more strident rock section. It’s a brooding bastard, but a brilliant one. KWC

‘Heroism’ is more gloomy than a grey day at an English seaside resort, and about as claustrophobic (“there is no escape” Miguel huskily reminds us). This demonstration of sound design production doesn’t quite have enough emotion to win me over totally, but it shows a producer with plenty of promise. NB

Not sure what’s going on in the video but I’m liking the goth tinges to this crescendoing neo-classical effort from the Greco-German duo. [if only Tsipras and Merkel could play so nicely together – Ed.] The gloomy atmosphere places them somewhere near Bauhaus while the spikes of horn and percussive elements have me wondering where These New Puritans have got to… NB

One of the better bands from the London DIY scene, Shopping are long-time Monitors favourites and I can hear why. Surf-guitar fun that clocks in at the perfect time with a death-punch-to-the-throat jauntiness. NB

It’s amazing that a record sung in Hebrew can sound pretty much identical to one sung in an English tongue, but shoegaze’s mood-over-mind approach crosses boarders as easily as instrumental music. I’ve been a bit down on recent attempts in the genre recently, but Vaadat Charigim’s high octane approach is one well worth digging into for any fans. NB 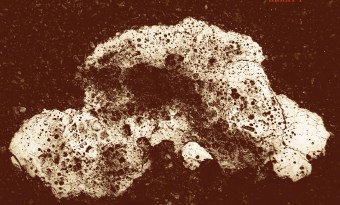