Our latest selection of recent singles finds Skepta calling out hypocrisy, Spotlights learning to breathe, and Protomartyr coming to ‘A Private Understanding’…

I’ve met a couple of fire-breathers, and frankly it doesn’t sound fun. At best you end up with an acrid mouthful of paraffin, at worst you accidentally turn your skull into a jack-o’-lantern. Listening to James Yuill’s ‘Fire Breathing’ carries none of these risks, and yet its gradual, elegantly constructed crescendo is just as impressive. It is, as the kids say, “🔥”.

The last Single-Minded included complimentary words about Coldplay, and the reappraisal of bland early ’00s mainstays continues with Kele Okereke’s palatable new single. I would never have imagined a time when the phrase ‘Bloc Party frontman reveals acoustic-tinged solo single’ could fill me with anything other than terror, but these are strange times we’re living in. Perhaps Okereke’s weary tones are simply in sync with the general atmosphere in election-battered Britain, but there’s something in the bruised mariachi of the chorus that’s just quite… nice. Nice is OK sometimes, right?

Another song that’s far from my usual cup of char but is still hard to criticise. Of course, it’s impossible to divorce ‘Praying’ from the saga that inspired it, which provides some serious contextual muscle to the song’s already substantial emotional wallop. Yet it’s a well-written and boldly performed recording in its own right, and the message of redemption and forgiveness is a powerful public response to a toxic situation. Not something I’m ever likely to stick on at home, but there’s no denying the potential of pop when it’s delivered with genuine emotional authenticity.

Barely a week goes by without someone saying it, but it’s a fact that not enough albums come with free nautical clothing patches these days, with Electrelane’s No Shouts No Calls probably the most recent example. Luckily it seems Misha ‘Memnon Sa’ Hering is about to end the sew-on shortage with new album Lemurian Dawn. However, this nifty bit of gear isn’t the only reason to get excited; lead single ‘Healing Chamber’ shows this could be an absolute pearler of an album too. Hering has dropped the questing guitars of 2014’s Citadel in favour of rolling waves of synth, which wash over a submerged bedrock of percussion with gorgeous consistency.

The title track from Nadine Shah’s forthcoming Holiday Destination is another impressive cut with a serious message. Inspired by news reports of tourists on Kos complaining about how washed up migrant corpses were ruining their holiday, Shah allows her bitterness to simmer rather than explode in this smart, brooding dissection, which echoes the Situationist graffiti that inspired a certain John Lydon: “Club Med: a cheap holiday in other people’s misery”.

This may not be the most memorable track Protomartyr have ever written (not that catchiness is their forte exactly) but it’s one of their most lyrically striking. Whether it really is “automatic writing by phantom limb”, as singer Joe Casey intimates at the beginning, is moot. This is poetry by anyone’s standards, referencing everything from Heraclitus and Trump to an apparently true incident in the mid-sixties when Elvis Presley perceived the face of Joseph Stalin in a cloud. In Protomartyr’s press release, Casey claims that “people have never been more skeptical, and there’s no shared reality”. Perhaps he’s right, but at least in music we can pool a shared revulsion at this turn of events.

More lyrical intensity here, as Skepta knocks out a new track better than almost anything on last year’s Konnichiwa album. Taking on the modern celebrity curse of anonymous haters on the internet, the Ivor Novello winner also glories in the slow death of record labels and claims he rejected an MBE. Skepta’s sinister but skillful production matches his lyrical output, although seeing as how most of the YouTube comments are about him wearing women’s clothing it’s fair to say he hasn’t skewered his online targets completely.

If you’re going to see Melvins on tour this year, you may be lucky enough to catch Spotlights in support. If so, ‘Learn To Breathe’ is likely to leave you gasping with its breathless mix of chunky, pummelling riffs and surprisingly weightless melody. The result is a bit like alternating shots of schnapps, espresso and diesel to kick off your Saturday night.

Apparently the titular teenage witch of Suzi Wu’s debut single is the perma-stoned Megg from Simon Hanselmann’s Megg, Mogg and Owl comic strips, which pretty much guarantees it’s going to be good. While the teenage theme is reflected in a couple of adolescent missteps (the cringy spoken snatches primarily), Suzi Wu manages to channel nineties slackerdom by combining Beck’s Odelay beats with the studied insouciance of Elastica.

The Blow – Get Up

Prior to this, all I knew of The Blow was a drum machine ditty called ‘Parentheses’ that appeared on an old Tomlab compilation. ‘Get Up’ suggests their style hasn’t changed hugely in the intervening decade. It also suggests that they’ve now mastered it. Described as “an intense rap about how it’s all just too much right now”, which is a feeling many of us can surely get on board with, Khaela Maricich’s stream-of-consciousness delivery contains plenty of ear-catching nuggets, such as “It’s like I came a little late to the orgy / all the piles had been formed and there were no openings for me.” [thanks for the correction, guys]

The introduction to ‘Lost + Bound’ brings to mind Depeche Mode if they were trapped down a well. The rest of it is like the local townspeople (including at least two members of the band OM) arriving on the scene and, rather than freeing the Mode from their watery trauma, proceeding to pour barrels of thick tar down on top of them before setting it alight. Which might not be the neighbourly thing to do, but it sounds bloody great. 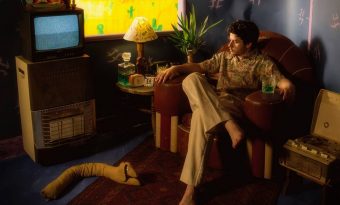 Our latest singles round-up spends some time in Jerkcurb's 'Voodoo Saloon', soaking up the sound of Arrows Of Love, BENET, Grace Lightman and many more...
Read More