There’s a point during Tundra where your consciousness suddenly gets kicked awake by the introduction of a steady, industrial techno beat. It’s a subtle moment, just as the title track finishes, which reminds you how impressive and immersive the soundscape is that Ian McDonnell and Dara Smith, aka Lakker, have managed to produce for their latest release on R&S Records.

Clocking in at fifty-five minutes, and with very little to distinguish individual tracks from the overall composition of it as a long player, it’s certainly not the easiest record to get into in 2015. There’s no stand-out tune, no ‘banger’. But here is an academically minded electronica record which is enthusiastic enough about the outside world for it to have enough heart to make it as much a mood-building experience as a demonstration of purely technical abilities.

The Dublin duo’s initial starting point is electronic minimalism of a heritage stretching from Aphex Twin’s Ambient Works to the current surge of industrial noise in Europe (as showcased yearly at Berlin’s Atonal festival). From a personal point of view, the more geeky and serious approach as encountered in Berlin is a little too dull to ever really spark much emotion, but Lakker employ a range of field recordings – church bells from Sweden, Irish choirs, motorway tunnels – in much the same way recent Monitors interests Herman Kolgen and Clap! Clap! do.

What this employment of musique concrete technique within pre-formulated tracks allows you to do is add some real analogue depth to what otherwise can easily become so self-involved it leaves nothing to offer the listener.

To pitch the dark, brooding, cinematic scope of the record in layman’s terms, think about a soundtrack to a horror film directed by Paul Thomas Anderson, or any of the art house directors (Lars Von Trier and co.) who’d need to make you feel really uncomfortable in a particular flashback or allegorical sequence. Third track ‘Mountain Divide’ is a thumping eight minutes of reverberated kick drum and distorted synths, but the ghostly, rising harmonies of the background build the track into something of a juxtaposition – the grim realism of the industrial set against the spiritualism of the religious.

Elsewhere, on the likes of penultimate track ‘Oktavist’, third party percussion ‘pretties up’ the otherwise pretty dark surroundings. It’s a record where two things are happening at once at all times, and it’s partly due to this attention to detail that Tundra lives up to its name, predictably sparking up visions of endless no man’s lands, but ones where bursts of life are still apparent.

The album wraps up with the tinkling of piano while drops of rain and ping pong balls clap away in the dissolving distance. Tundra is certainly a concerted effort to build a mood, and unless you’re having a particularly bad year, or want to make it sound like you are, you’re unlikely to have many opportunities where it will fit the situation. Despite this, Lakker offer enough glimmers of hope and audible reflections of the world around you to ensure that if you give it the full hour to slowly sink in, this album will no doubt leave you feeling mysteriously rejuvenated.

Colin Stetson & Sarah Neufeld - Never Were The Way She Was 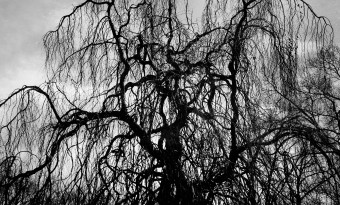 Despite previous collaborations and a romantic association, there was always a risk that Colin Stetson & Sarah Neufeld might dilute each other's potency on 'Never Were The Way She Was'. Luckily that's not the case.
Read More