Right, let’s talk Teardrops shall we? The new album from Shit and Shine, AKA one-man experimental sound-mangler Craig Clouse.

Throughout their existence, Shit and Shine have been a hard ‘band’ to pin down, musically speaking. Emerging from the deliciously rotting corpse of truly wonderful noise-peddlers TODD, Shit and Shine began as a sort of un-categorisable multi-drum-when-live headfuck, and slowly, as the years have aged by, become more refined and electronic.

Having released god knows how many records of this peculiar blend of aural bewilderment, Clouse had recently been experimenting with a more dance-based sound, culminating in last year’s brilliant 54 Synth-brass, 38 Metal Guitar, 65 Cathedral released by the charming devils at Rocket Recordings. 54 Synth-brass, 38 Metal Guitar, 65 Cathedral received highly positive reviews and was possibly Shit and Shine’s most commercial album to date (well, relatively speaking).

So what should the always transgressive Clouse do next? Well, make a devastating mutant grind-core album, obviously.

Teardrops is that album and my god is it nasty. Released by the genuinely awesome Riot Season, Teardrops is an unpleasant and filthily rewarding listen if you’re willing to get your ears a wee bit dirty.

First track ‘Schecter Omen Extreme 6’ is a proper disgusting barrage of abusive noise-vomit that will instantly melt your eardrums into a thick gooey mulch. This is followed quickly, and I do mean quickly as most of the songs last less than two minutes, by ‘Kramer Baretta’, which oozes an industrial oil slick muck from every piston-pounding pore. Within the molasses there lurks the charred remains of some sort of mangled vocals but what the voice is going on about is anyone’s guess.

It’s the sound equivalent of smashing your head into the bonnet of a cheap stolen car, as rabid onlookers pelt you with questionably wet sponges. Half the song sounds as though someone is tuning in and out of consciousness, and this fluctuating mind frequency fuckery is carried on throughout the entire album. It plays like an agitated child messing about with the dials on an old AM radio.

‘BC Rich Celtic Virgo’ starts with an ironic sample: “Get ready for pure disco!” I’d like to see John Travolta snake-hip the night away to this soiled fucker. It features a pleasing thrash guitar chug that just so happens to be buried beneath a wash of hideous high-pitch shrieks and screams. It neatly sums up the stupefying effect Teardrops collectively causes during its brief 25-minute running time, a car-wash of pain. Instead of water and brushes the metaphorical audio-traveler is brushed with razorblade-sharp wire wool and squirted with water-deprived treacle-urine. It’s terrifying and disturbing but ultimately excellent.

‘Jackson RR3 Randy Rhoads’ is the audio equivalent of Shinya Tsukamoto’s cyberpunk belter Tetsuo: Iron Man. Grimy, bleak and headache-inducing, this heartwarmingly horrible sound collage will make you feel sick in the best possible way. ‘Ibanez Destroyer’ continues this Tetsuo-like theme, melding the digital and analogue together to create a hulking, steaming beast. It brings to mind images of machines and mechanisms systematically destroying weak flesh, creating something new in the process, something which exists somewhere between the two, neither organic nor synthetic. A mess of wires, sinew and bone.

‘Aria Pro 2 ZZ Deluxe’ has a righteously evil riff running through it and is a bewildering mix of Aphex Twin and Celtic Frost.

So sure, some people might listen to this and think ‘what the fuck is this?’ and be put off by the sheer relentless brutality of it. Indeed, Teardrops is a brutal and uncompromising creation from someone who likes to mess with the listener at every turn, a confusing and confounding digital nightmare, but it is truly beautiful in its hammering, unapologetic ugliness.

It’s not an easy listen. You will not stick this on during a sunny Sunday BBQ with your mates. It’s not a lighthearted trawl through whimsy that will brighten your mood after a long hard day at work. It’s dark, aggressive and violent.

So if, like me, you’re feeling in the mood for some punishing music-masochism, then this is for you. Nobody does it better than Shit and Shine. 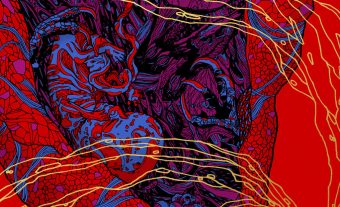 Detroit punks Child Bite have a bit more ferocity spilling from their frothing gobs than a real child, and a tad more point to their rotten gnashers...
Read More