Kelly Lee Owens’ story arc is inspirational, for it is a familiar aspiration often known to lose its way before delivering the goods. From the Welsh coast the young hopeful upped sticks for London, worked at record stores, met musicians at the top of their game, and diligently honed her craft until March 2017, which sees the release of her self-titled debut.

Owens also contributed the vocals on Daniel Avery’s much admired Drone Logic; if those vocals’ appealing impassivity had left you a little curious and hungry for more, you will be pleased to know that the singer expanded her range to record an album adorned with vocals both hot and cold, to complement her own sonorous techno grooves.

Kelly Lee Owens’ music moves with fervour in a shifting twilight zone between tender ambient and rich, satisfying electro. Minimal means are employed to sketch a vast soundscape with room to let thoughts wander, while sparse but very effective electronic sounds flourish and keep the focus as they purposefully motion the path ahead.

Her songs glimpse the promise of escape and forward movement, mentally and physically, but the promise refuses to materialise. Instead Owens happily embraces the beckoning calls of the forceful undercurrents that lurk in each track’s dark backwaters.

The pop feel on opener ‘So’ draws a scene of wonder and naivety, emotions that might stir an adventurer entranced by the countryside after a long stint in the mucky city. Fittingly, ’Arthur’ is heralded in by chirpy birdsong and forestal sounds that could have been recorded from a tent on a spring morning, but it is not long before the pastoral idyll is gently pierced by a beguiling bass that pulsates from deep below to threaten and seduce.

‘Anxi’ and ‘Lucid’ start with cooing, emotionally-laden vocals before they are swept up by warm, throbbing electronica to end in a wide, disoriented finish.

Beginning with an orchestral cello, ’Bird’ spirals around an even glockenspiel that gives the impression of being played underwater before it moves sideways to clear the path for an all-encompassing, exquisitely timed bassline consisting of a simple, descending interval repeated over and over, which has stayed wedged in my brain since the first listen.

‘Evolution’ and ‘CBM’ will delight clubbers. ‘Evolution”s looped vocals are reminiscent of the ’90s trance of ATB. With my ears still glued to Owen’s multifarious pronunciations of the word evolution, the bass subtly attacks and steadily swells before the track embraces a lush finale of bouncy, steady beats overlaid with squishy, fleeting vocals. ‘CBM’, similar in structure to Avery’s ‘Drone Logic’, really opens up in the second half as it introduces an expansive synth melody. It unfalteringly wraps itself around my mind at each listen, while a pronounced beat dryly ticks away with robotic precision.

Co-written with Avery, ’Keep walking’ is an ambient ballad with echoes of Massive Attack’s ‘Teardrop’. The veneer of shielding techno completely drops away here to expose vulnerability and inward strength.

‘8’ reaches a beautiful symbiosis of the celestial with the earthly played out in real-time (the track lasts 9 and a half minutes), where one embraces and releases the other as day follows night. A spectacle worth beholding.

By citing Arthur Russell and Björk among her inspirations, Kelly Lee Owens sets the bar high and delivers a tour de force. Similar to Björk’s earlier work, Owens engineers and maintains an exciting tension by juxtaposing multi-faceted vocals with self-assured electronic sounds that often pounce unexpectedly, like they had just received orders to transport me to a secret rave in full momentum.

‘So’ and ‘Throwing Lines’ pass as more light-hearted pop songs, with nods to artists like Grimes and White Hinterland, but the album as a whole never relinquishes the city’s backdrop of anxious, barren velocity: when the music does veer off to less fraught and slightly less interesting pastures, Owens’s endorphin-releasing doses of soft but deep electronic bass more than compensate for such minor departures.

sir Was - Digging a Tunnel 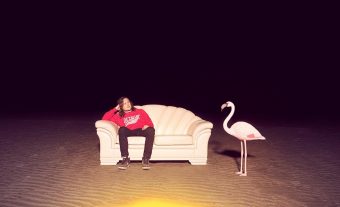 The subtleties of Swedish multi-instrumentalist sir Was may take a while to sink in, but once they do you're deeply rewarded...
Read More