If there’s one thing Berliners like it’s techno – although I’m starting to think someone has made that up, as the first thing that struck me about Berlin Atonal was how many Americans, English and Irish people there were. By the end of the night I was genuinely surprised when I overheard a conversation in German, which seems weird, as I was in, y’know, Germany.

In any case, Atonal was a love letter to the 4/4 beat, analogue and digital artists building psychedelic landscapes, atmospheres and subtle pieces of musicality around throbbing basslines.

The event, which has now been running for over thirty years, took place in the abandoned Kraftwerk power station in the much buzzed-about Kreuzberg area. On approach it looked like a massive Argos warehouse; inside it was a desolate concrete industrial monument. Pillars the size of the house I live in jetting up to support dense ceilings. Even the toilets had an eerie, plain, symmetrical Kubrick aesthetic to them.

Techno being a sort of anti-performance too, the light shows had to do a lot of the work. Not that they’d skimped on this feature – the stage had a soundsystem to be proud of and enough lights to give Primark on Oxford Street a run for its money, the dashes of pools of light giving the intimidating space a bit of heart. The backdrop was a forty-foot projection slide which showcased the expected eye trickery.

There was an art installation room which contained 32 bulbs each on opposite ends of rotating poles, whirring around making a sort of ‘going through a wormhole’ noise. The lights flickered on and off. It seemed a bit like the insides of the Starship Enterprise if it was running out of fuel and about to crash. I think it was meant to be the chill-out room but don’t take my word for it.

That was maybe my favourite part of the event. A true fusion of art, lighting, architecture, atmosphere and sound. I’ve really got very little interest in watching a bloke do (seemingly) very little with a laptop for an hour. If you’re going to do an arty atmospheric project maybe just go all the way and make the performance as engaging as the sounds? In fact, why try and do the performance at all? Techno is the cold heavy face of electronic music, and I just can’t find a reason why in a gig setting I need to see anyone’s actual face. 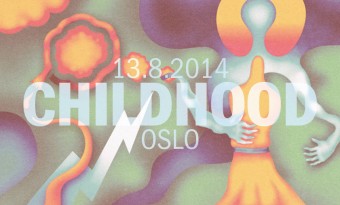 Childhood may be the 6 Music ones to watch right now, but an over-zealous smoke machine and static stage show meant there wasn't actually much to see...
Read More