British heavy music is currently in the midst of a welcome renaissance. With newer bands like Limb, Ex People and Elephant Tree all delivering outstanding records in recent times, the release of a new Steak record provides an opportunity for one of the scene’s flag bearers to retake the throne.

My introduction to Steak came back in 2012 at The Windmill in Brixton. Serving as support for fellow UK stalwarts Gurt and the now sadly defunct Dopefight, Steak completely stole the show. There was a palpable excitement after the gig and my friends and I were not the only ones discussing the ridiculous girth of tone on display. London had a new stoner band and they were the absolute tits.

After a pair of EPs in 2012 and 2013 and a swell of hype, the band released their first long-player Slab City in 2014. Recorded at Thunder Underground in Palm Springs, California with Harper Hug (John Garcia) on production, the album more than justified the acclaim and confirmed Steak as one of the UK’s most exciting new acts.

As a band sets out its stall in the scene there will always be a certain level of scrutiny as listeners try and figure out who they are. The first step in this process is the inevitable hunt for influences and reference points. Unfortunately this always opens the gates to idle comparisons. ‘Kyuss’ is a name that has followed Steak around for years now.

When it comes to the songs on Slab City this judgement is just lazy. Sure the constituent stoner-rock ingredients are all present but this can be said of any band in the genre. There is more than enough variation in layer, arrangement and execution on that record to warrant more effort from the listener, and as is always the case with records that grow, the exertion is more than rewarded.

Where Steak might have made life a little difficult for themselves on their debut was the production. In hiring Harper Hug you are getting a particular ‘sound’ which he definitely delivered. The lo-fi raw production that has served many stoner bands so well is purely a matter of taste. For me it never quite captures the weight present in their live show and it is this audio thread that lazier listeners will have followed to the Kyuss pigeonhole.

So as No God To Save opener ‘Overthrow’ kicks in the door and a smug grin invades my face it becomes clear, Steak have not just cut that thread, they’ve taken an axe to it. The behemoth I witnessed back in 2012 and again recently supporting Elder is still here, but this time round it’s been rendered perfectly, in all its fuzz-soaked horror.

Not only has the production taken a step up, so has the calibre of writing. There is a wider palette of influences at play here. ‘Overthrow’ begins with a riff that evokes Gish-era Smashing Pumpkins. It turns out however, that this is merely the insertion of the audio-tip. Drummer Sammy Forway’s gargantuan snare proceeds to drag each subsequent bastard-riff into halls of head-banging filth. As we hit the two-minute mark, singer Kip makes his entrance: “If they win us over, will we stand in line?” Again my scrunched-up banging face betrays the standard of both delivery and production. His voice has always been impressive but here it sounds absolutely huge. ‘Overthrow’ proceeds to wind its way through almost seven minutes of A* stoner heft.

Up next is the superbly named ‘Coke Dick’. After the twisting long haul of ‘Overthrow’ this is a much more direct affair. Again the riff is about as worthy as it gets but this time James Cameron’s bass supplies an incontrovertible bulk. To top it off Forway adds a sprinkling of cowbell, which is always welcome.

‘Clones’ is the first slow builder of the record. Commencing with a minute of stuttering toms and psych-guitar the song escalates into a proliferation of driving chords. As the song reaches its climax Kip chants “I’m ready for the atmosphere” in a growl worthy of Beastwars’ totemic singer Matt Hyde.

‘King Lizard’, ‘Living Like a Rat’ and ‘Mountain’ inject a shot of driving pace into the record and before you know it ‘Rough House’ swerves into view. With a bittersweet and timely nod to Soundgarden, the song wouldn’t be out of place on Badmotorfinger. What starts out as a solid grunge-inflected heavy rocker, builds into one of the album’s standout moments. Shortly after some stellar emotive lead-work from guitarist Tee, Kip croons “Why do they all walk away” and the song chugs to a brutal exit.

‘Wickerman’ again evokes touches of the now sadly departed Beastwars. Ebbing and flowing through meditative psych-jams into a well-judged grungy climax, the song never strays into imitation. As on the previous songs, this is all Steak and it is genuinely exciting to hear a young band answer their critics with such a well-judged and mature piece of heavy song-writing.

The album closes out with an instrumental – ‘The Ebb’. Reece Tee’s ear for melody is laid bare again as acoustic guitar leads flicker and weave with their amplified brothers. The song is a fitting end to an album that demonstrates such craft.

With No God To Save, Steak have left absolutely zero room for lazy comparisons. It is a record with its own identity, painted from a palette of eclectic influences. There is no forgery or replication here, just a set of 10 outstanding heavy rock songs rendered in colossal gruesome clarity. The record also sends out a message: Steak have taken the throne, and if you want it back, you better have some fucking big riffs. 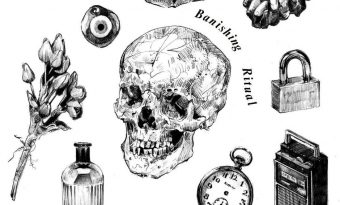 The band may have broken up before its release, but Feature's thirty-minute 'Banishing Ritual' makes for a thrillingly spiky eulogy...
Read More