With a line-up this diverse, lengthy & sublime, you’d be forgiven for thinking that festival season had started early. The presence of the enigmatic DOOM, labelmate Lapalux, Kutmah and Shabazz Palaces, completed by the headliner – man of the moment Flying Lotus – threatens to be an early contender for gig of the year. Riding high off last year’s awesome You’re Dead! album, enjoying a Radio One residency and playing a key part in the production of Kendrick Lamar’s future classic of an album, Flying Lotus’s stock is at an all-time high and consequently Brixton Academy will be his biggest UK show thus far.

Flying Lotus comes from a family with musical pedigree very few can match; he can call Alice Coltrane auntie and count Marilyn McLeod, singer-songwriter for Diana Ross amongst others, as a grandma. Coming up through the J Dilla-inspired L.A. beat scene that spawned the now infamous weekly club night ‘Low End Theory’, Flying Lotus’s debut album 1983 caught the attention of Warp Records – who would go on to release his sophomore effort Los Angeles.

Each subsequent album has seen a growth in sound and taken more experimental approaches to production. By utilizing samples, synths and musicians/singers, be they Herbie Hancock, Thom Yorke, long time collaborator Thundercat or Erykah Badu, to blend hip-hop, jazz and electronica, Flying Lotus has created a sound that can only be described as his own.

Whilst his innovation continues to gain new fans, it has also led to other doors opening, composing music for Adult Swim programs and hosting his own radio station on Grand Theft Auto V, as well as higher profile festival appearances. His label Brainfeeder launched in 2008 and has become a movement in itself, releasing an abundance of material from a diverse pool of talent, from the cream of L.A.’s beatmakers to singer/musicians/rappers from around the world including Essex’s own Lapalux, who on the night will be doing a DJ set promoting his new album Lustmore.

Also on the bill will be the ever-elusive masked maverick DOOM in a welcome rare appearance, where his eccentric lyrical wizardry will be at the fore and no doubt have all present chuckling and clucking for a sequel to the legendary Madvilliany LP. Performing inside a giant canvas hypercube, Flying Lotus will have a spectacular, trippy visual edge as a centerpiece to his show that his videos have previously hinted at. The stage construction is similar yet different to Amon Tobin’s groundbreaking ‘ISAM’ performances, and will provide an ideal accompaniment to FlyLo’s unique soundscapes and help make the night one not to be missed. 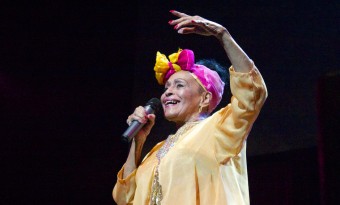 Amadeep Chana witnesses the end of an era as Orquesta Buena Vista Social Club bow out at the Royal Albert Hall, after playing more than a thousand shows over the last sixteen years...
Read More