The super-producer that is Steve Ellison, otherwise known as Flying Lotus, has never been one to settle for defining the norm. Rather, his music, incorporating layers of musical genius from all genres few could even fantasise of knowing, extenuates the art form of music itself. Where other artists push boundaries in their respective genres, FlyLo aims at pushing all boundaries away from him, a consummation of all musical endeavours, from hip-hop to electronic to jazz to rock ‘n’ roll.

You’re Dead!, his 5th studio LP, further walks this fine line, eliciting his influences on every edge, bend, and fold, with not a single moment passing where Ellison seems truly lost, despite the improvisational tone of his music. The galactic opera of Cosmogramma is a thing of the past, as his latest takes more from his previous LP Until The Quiet Comes, and its subtle dream-scapes, filled more with movements than with bonafide songs.

For Ellison, this works as a double-edged sword, perfecting a craft without expanding upon it. This is what constitutes much of You’re Dead!, a re-imagining of his previous effort via a mind-bending trip through one’s death, complete with peaceful yet mystifying production sending you to the heavens, as soft instruments lay you to rest.

There’s always been something off about the way Flying Lotus commences his albums. This was first noted on Cosmogramma where the ‘intro’ took place on the fourth track, with the previous three setting the stage for the bulk of the album, with alarming synth pulses and rapid drum loops. Here, in terms of beginning an album, Ellison seems to have eclipsed himself, following the same format and excelling in it flawlessly. Much like how ‘Dun’ symbolised the lead’s death on The Roots’ undun, ‘Theme’ works in the same way, just rather than looking down on the collapsed body we’re ascending to the stars in it, as a vessel to another dimension. After the intense climb reaches its threshold, a barrage of trumpets, flutes, and haunting melodies pace the listener back to reality. ‘Tesla’ then follows, representing the jazz scene, while the washed-out, guitar-laced ‘Cold Dead’ catapults us to a mellow nightclub in the ’70s.

All this builds to You’re Dead!’s definitive centerpiece, ‘Never Catch Me,’ as an elegant piano melody accompanies Kendrick Lamar, the first voice heard on the record, as he ripples through the stratosphere detailing the synopsis to Ellison’s vision with a verse that’s every bit as detailed as it is wholesome. This is how Lotus reels you in, by saving the album’s true intro, just when you’ve begun to cool down.

You’re Dead!, unlike previous Flying Lotus releases, includes subtle hints of rapping, with Lamar standing as the most obvious example. However, Ellison’s alter-ego Captain Murphy makes two appearances here, both on the bombastic ‘Dead Man’s Tetris’ and the LSD trip gone wrong ‘The Boys Who Died In Their Sleep.’ Unfortunately in both Murphy fails to take centre stage, mainly acting as the maniacal voice guiding the track rather than showcasing new verses. Thankfully we’ll have a proper Murph release soon, but for now his appearances on You’re Dead! are rather lacklustre and tacitly appended on.

Other features in FlyLo’s arsenal are his long-time collaborators Niki Randa and Thundercat. Randa sports her best Until The Quiet Comes recitation on ‘Your Potential//The Beyond,’ with a luminous beat swaying to her echoing cries, while ‘Descent Into Madness,’ Thundercat’s track, details the failing of one’s sanity with his high-pitched crooning. Aside from Lamar, and a joyful Snoop Dogg sighting, these features don’t carry nearly the impact FlyLo strives for and are merely just blimps on You’re Dead!’s ever-expanding radar. Where the album thrives most is through its structure, style, and substance.

Despite taking influence from nearly all pockets of musical legends, Flying Lotus always sounds entirely distinctive. Ever since his early work on projects like Los Angeles and 1983, his style was dissected and matched within an instant; his allure carries throughout the music itself, You’re Dead! being no different. The 38 minutes here, spread out over 19 tracks, represent a singular crusade, bending and fluctuating as movements bleed into each other, either from track to track or within tracks themselves.

The shining jewel of this aim is ‘Coronus, The Terminator,’ a stunning expose on the revelation that mankind is ending, with gospel-like chants and talk of saving the last men Earth has to offer. The opening notes, deep with soul and emotionally wrought, sound eerily like Outkast’s ‘Elevators’ with a thunderous bass matched to minimalist hi-hats. The track that prefaces this, ‘Stirring,’ and the one that follows, ‘Siren’s Song,’ seamlessly seep into ‘Coronus’, unnoticeable to the unconditioned ear.

This sentiment is instilled throughout the project, by FlyLo’s standard one cohesive whole outweighs its parts. The fear though – that not having singular songs to latch onto may drive listeners away due to the fact that sitting down in its entirety could prove tumultuous – is entirely real and up to the listener to interpret their preference, which will likely affect their enjoyment of You’re Dead!.

Flying Lotus’ latest endeavor is a fascinating journey into the mind of a man obsessed over two things; music and death. How those two entities melded together in Ellison’s brain was unlike anything others could imagine. The fear of death lingers, sometimes over-strung anxiety where an overdose seems like the likely finale. However, the majority of You’re Dead! floats gracefully to one’s own demise, free-forming, without theatrics, just the bare essentials. Thoughts of paranoia and confusion creep up, only to be overtaken by progressive trumpet and harp sections that inculcate one’s finale will be peaceful however you make it. This isn’t what our deaths sound like, more what Flying Lotus imagines them to be. And, unfortunately, this leads to some pitfalls, most notably his persistence on overtly jazz instrumentation as the dominant sound in his music, accompanied by a litany of other skills he’s built up over the years, culminating in another LP that sounds similar enough to the previous works to warrant a deduction based off lack of expansion.

Regardless of Ellison’s repetitious trademarks, You’re Dead! fosters more of what we love from him, unique musical pieces that border so many genres, resisting the urge to gravitate to one. It’s an LP worth getting lost in before you die, because it’s inevitable it’ll play when you do.

NehruvianDOOM - Sound of the Son 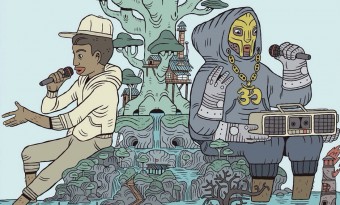 Any new MF DOOM-associated release is sure to get fanboy tails wagging. Yet after listening to NehruvianDOOM, would it be more humane to have them put down?
Read More