For most people in the UK, the word ‘mixtape’ used to simply mean that battered Super Ferric C90 covered in stickers that you gave to someone you fancied, in the hope that somehow your taste in music would cause them fall in love with you. However, as the ubiquity of actual cassette tapes has declined, alternate meanings have become more popular – not least in the world of hip-hop, where the mixtape has enjoyed a rich history going back to the ’70s.

Now, when someone announces they’ve released a mixtape, it usually means one of three things: an album of original tracks, an album based on versions of other artist’s instrumentals/a capellas, or an actual DJ mix, the one glorious thing they share being that they’re all released for free. North Carolina producer Hominidæ‘s new mixtape manages to combine every one of these definitions, and much like the best of those old homemade Maxell efforts, it’s made us fall for him hard.

The hour-long mix includes his own tracks and various remixes, sequenced in such a way that it sounds more like a collection of about twenty different electronic and hip-hop artists rather than the work of one man. Presumably his training as a classical pianist and percussionist has helped nurture his talent for immaculate harmonies and irresistible beats, a combination that results in something that wouldn’t sound out of place on Flying Lotus’ Brainfeeder imprint – echoes of Teebs, Lapalux and the big man himself are audible at points.

However, this mix has actually been produced for a newer label, Brighton-based imprint Lost Tribe Records, the brainchild of Mark Dobson, aka fellow electronic adventurer Ambassadeurs. Lost Tribe are set to release a new Hominidæ EP, ‘Summon’, in the near future [in fact, you can now listen to and download it below], but until then we’ve got our work cut out trying to track down every single track featured in this mix. In nature, the family hominidae are the great apes from which we humans are descended. In music, Hominidæ feels like the next stage of evolution.

ADDITIONAL: Hominidæ now has another EP, Boscages, out on Lost Tribe. Listen below… 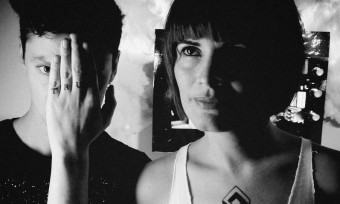 A classically trained Swiss duo producing perfect pop nuggets from a fallout shelter in Bern? It almost sounds too good to be TRUE...
Read More