Hello again, please take a seat and join me on a wee journey. In your head I mean, no need to change – don’t worry we’re not literally going anywhere. We’re not that close.

Imagine if you will that you’re walking through a dry arid mountain-scape. Plant life no longer exists, and the dusty scorched earth crumbles beneath your bare puckered feet. You’ve travelled far and wide with no end in sight. You stumble, mind swirling from the rising heat as exhaustion takes its toll from this fatal expedition. As you stagger dangerously close to a crevasse you just about manage to haul yourself back before hurtling to your death.

Phew, aye? That was bloody close. Good thing no one saw, that is not the way for the glittering, honour-filled life of a noble knight to end.

Wait, what’s that dim chuckling and faint whiff of shit?

There’s some sort of mad fucking warlock-git shouting violent obscenities at you from atop a gnarled cliff top nearby. The bastard just won’t leave off. He’s saying very hurtful and mocking things too. Chuck some stones at the twat, that’ll knock him down. Shit! He had mates and they’re all coming to duff you up. They’ll probably just try and do some magic or summat so kick ‘em in the balls.

Ah. OK, it didn’t work, they’ve melted you right down into a fleshy puddle. Oh well. I’m not very good at fantasy stories. But to appease the pointy-hatted bearded wankers, give them a lovely copy of Warhorse’s newly reissued As Heaven Turns To Ash. It’s a cracker, and they’ll leave you well alone. Warlocks love the sadly now defunct WarHorse, and so do I.

Thankfully the delightful team at sludge label Southern Lord are dragging 2001’s As Heaven Turns To Ash from its filth-mired grave and re-releasing it along with WarHorse’s final 7″ EP, the ironically titled I Am Dying, originally released just before they split up in 2005.

As Heaven Turns To Ash is the Massachusetts doom-mongers’ long out of print and consequently much sought after debut (and only) album, and my lord is it heavy. You could probably guess that from its title.

It’s gloomier than a birthday party at Skeletor’s where no one has turned up. He sent out the requests with plenty of time and everything. He even invited He-Man. But no one showed up to the poor devil’s carefully crafted soirée. Doomy.

For an album that is almost relentlessly heavy, ‘Dusk’ is a grungy acoustic wrong footer of an opener, all light and wispy. It’s a devilishly crafty way of luring you into the album before ‘Doom’s Bride’ hits you like a sledgehammer made of galvanized human femurs, knocking you head first into a pit of flames. It’s not long before the rabid beasts of the fire are licking at your swollen feet like there’s no tomorrow. Fabulous.

‘Black Acid Prophecy’ has a delicious deep bass intro. I mean well deep. Like looking into a bottomless pit in the well-stocked library of Roland Barthes’ flat. The whole album has that wonderful feeling akin to having a pile of bricks dropped on you by someone you love. It’s groovy, enjoyable and yet utterly evil. A bit like Toblerones.

‘Dawn’ features the vocals of a grizzled satanic goblin, poised determinedly on your shoulder, hissing foul deviant pleasantries into your ear. Which is oddly relaxing. Mixing slowed-down doom sludge with big tasty stoner riffs, it’s perfect for a gang of narc’d up wizard sods up to no good.

‘Amber Vial’ is a gothic stroll, a gentle change of pace as languid mystic vibes spin off into the sun and galvanise into the anthemic (but still brutal) ‘Every Flower Dies No Matter The Thorns (Whither)’. Which has a guitar that sounds like it’s being sucked head first through a vacuum.

The second half continues to create a crusty claustrophobic sense of impending doom. Like being buried alive. Then set on fire. ‘And The Angels Begin To Weep’ is fucking creepy. It’s a plaintive piano send off, seeing the end of the album off with a melancholic wave of a flamboyant bony hand. It’s been a smashing way to spend 70 minutes.

As Heaven Turns To Ash. Crack it on the stereo system, turn it up, and get those neck muscles working. Just be sure to steer clear of those bloody warlocks whilst you’re doing it. 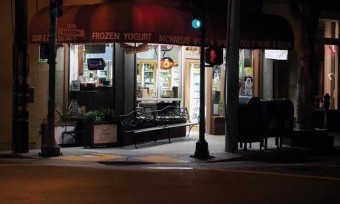 Snug enough to sink into deeply, yet with enough rough textures to stop you actually drifting off, the debut album by Feather Beds is the stuff dreams are made of...
Read More