Steak have played a large part of the London stoner rock scene for the last five years. Having previously seen them support Dopefight at their farewell gig in Brixton four years ago I’m pleased to see they have built well on that commanding performance.

I must confess I was a little bit disappointed with the production on their long-anticipated debut Slab City. I felt it didn’t quite capture the weight of tone I saw back in Brixton 2012, so as the gargantuan fuzz and croon of ‘Liquid Gold’ echoes around the Underworld I am gladly reminded of the dirt they have on tap. ‘The Butcher’ still saws and screams through a loyal local crowd and as the band smash their way through their opening set they more than justify such a coveted opening slot.

Virginia doom-pushers Cough are up next with by far the heaviest sound of the evening. Being not that familiar with their material doesn’t prevent me from bowing to the sheer thickness of doom crushing its way out the Underworld’s PA. With riffs in a similar vein to Dopethrone-era Electric Wizard, Relapse Records can definitely be expecting some of my sterling very soon. The heavy sludge laid out by Cough on this expectant London crowd serves as a perfect counterweight to the more classic vibes to come from tonight’s headliner.

Elder have come a long way since the humble beginnings of their self-titled debut. The large musical distance travelled between that record and 2014’s outstanding Lore is acknowledged as I join the queue for the merch stall prior to the show. As songwriter and frontman Nick Disalvo chats with a couple of young fans I overhear him refer to their debut as the ‘shitty one’. Considering the band were only in their late teens when they cut that record I feel he is being a little harsh on himself but admittedly, as with many young stoner/doom debuts, Elder plays like an ode to Sabbath and Sleep rather than the intricate and extended riff pilgrimages that have since become Elder’s hallmark.

Having been lucky enough to have caught their stellar Desertfest slot at KOKO earlier this year, I was not at all surprised to see the Boston trio sell out the Underworld with ease. The progression in both craft and performance demonstrated across that hour back in April served as a watershed moment and placed Elder firmly in the upper echelons of underground rock. After such an accomplished step up to a bigger stage I have high expectations for tonight’s set.

As Elder take the stage and Disalvo initiates the hammer-on intro of ‘Compendium’, the packed crowd let out a roar of recognition. Where as on their debut record the influences lurked in the background, here they are whittled and carved into new and improved sonic spears. Having been brought up on the titans of rock, for every Baroness and Mastodon track I send to my old man he invariably raises me a Zeppelin or a Groundhogs. ‘Compendium’ will always have a special place in my heart as the riff bears a striking resemblance to ‘Immigrant Song’, only it’s better, and the song that encases it is in a completely different league.

These are big words I know but they’re ones my generation can rarely say in truth, so when the opportunity arises it must be taken. Disalvo’s dexterity on the guitar has always been impressive and as the aforementioned juggernaut riff drops and he fittingly sings ‘born upon the cusp of revelation’, the Underworld goes nuts.

When a band’s songs regularly pass the ten minute mark, you always know that you’re not going to get all the hits in one set. So as the arpeggios of 2012’s EP track ‘Release’ ring out my mental wish-list gets a big smug tick. One of the things that sets Elder apart is that the sum of their live sound far outweighs their three constituent parts. As Disalvo flickers between chugging riff and fleeting throwaway melodic-runs, the rhythm section of Jack Donovan’s bass and Matthew Couto’s drums consistently keeps things interesting.

Due to the complex nature of some of the guitar work, Disalvo can often cut a slightly stationary figure on stage; but Donovan and Coutos’ movement, energy and ability to always go left when Disalvo goes right keeps the band turned up to huge at all times. As the instrumental final act of ‘Release’ stutters and swells this exceptional rhythm work more than matches Disalvo’s guitar-wail outro and dutifully the faces of the crowd tell the same story.

New song ‘Sanctuary’ follows and as the song winds its way through a thundering tom intro, staccato chugged verses and then off into an extended guitar solo, the exceptional musicianship the band wields is put to impressive use. As is often the case when playing new material the band look pumped, with Disalvo clearly enjoying the chance to flex his dexterous guitar chops. The song wouldn’t be out of place on Lore and bodes well for the next record.

The next twenty minutes take in more new material and the superb album cut ‘Spirit At Aphelion’. I feel a slight pang of disappointment to not hear ‘Legend’ this time around but such is the nature of a band with so many great songs. As Elder leave the stage only to retake it moments later for their encore, I make my way down to the front as ‘Gemini’’s pounding one-note intro signals the start of something large.

Over the course of its ten minutes, Dead Roots Stirring’s standout track still has the ability to induce yelps of glee from even the most stubborn rock hipster. As the second bridge builds to its climax and Disalvo’s descending guitar lick intertwines with the pummelling toms I can’t help but shake my head and mutter ‘for fuck’s sake’ at the sheer epicness of it all. Just as I do a fellow pit-dweller looks me right in the face and laughs, in complete and total agreement.

With the release of Lore and this recent slew of shows Elder have established themselves as the future of interesting rock. I am now sure that in twenty years time, when my kid plays me his or her latest six-string discovery, I will give a nod, smile to myself and say, ‘yeah they’re alright, but have you heard Elder?’ 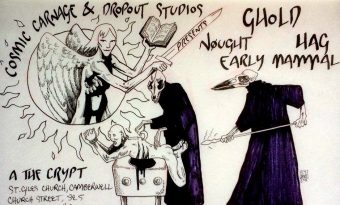 If you got a chance to spend an evening in a crypt would you turn it down? If the answer is yes then you'd better leave, if the answer is no, then welcome...
Read More