Red Fang have long had the knack of killing two genre-birds with one riff-gnarled stone. This relatively rare skill has propelled them to their recent success whilst at the same time affording them the luxury of straddling multiple heavy genres. Since their inception in 2005 the Oregon four-piece have been releasing great records with split personalities.

Their first face is sculpted from a more traditional and hook-laden core with bassist Aaron Beam providing vocals. These slightly less heavy songs make up the majority of the singles, serving up singalong choruses and, in the case of their biggest tune ‘Prehistoric Dog’, first-class riffs. The second and heavier sound present on songs like ‘Malverde’ sees guitarist Bryan Giles take lead vocal duties and along with some big Melvins-esque sludge riffs adds an enormous weight to Red Fang’s catalogue.

Across their first three records I have definitely preferred the more accessible stable of songs that supplied big radio-friendly hits like ‘Wires’, ‘Hank Is Dead’, ‘Blood Like Cream’ and of course ‘Prehistoric Dog’. Where Only Ghosts excels is in maximising the grey areas between these two distinct sounds and bringing the two personalities back to a more cohesive whole. The exciting thing about this achievement is that it has been done without diluting either approach.

Lead single and album opener ‘Flies’ demonstrates this perfectly. An offbeat and choppy riff escorts Giles’ guttural delivery, and immediately past experiences would infer, ‘oh it’s a Melvinsy one’. This assumption is quickly proved wrong as the chorus hammers in and Beam sings ‘you know that I can’t sleep / I’ve been awake for weeks’ on an infectious melody. The song crams Red Fang’s two personas into a vice and squeezes them into a filthy new beast. This monster rears its head repeatedly, including on follow-up single ‘Shadows’ and the relatively straightforward ‘The Deep’.

The production on Only Ghosts sees Red Fang roll out the big guns. The combination of Joe Baressi (Melvins) and Ross Robinson (Korn) is felt throughout the record, although I would argue that Baressi’s touch is a tad more prominent in the fantastic sleazy guitar tone. The staccato stoner riff of ‘Cut It Short’ effortlessly spirals into a memorable chorus, with a grungy chord outro evoking the earlier records of a certain Sub-Pop titan. The production here is well-judged, successfully delivering radio-friendly girth whilst dodging the mid-heavy mud that plagues the stoner/heavy-rock genre.

Having previously worked with Korn, Ross Robinson knows a thing or two about enormous bass tones and ‘The Smell Of Sound’ opens with Beam on the rumble, immediately inducing a bout of rock-face. A forgettable vocal melody is made up for with ethereal guitars that wither into a punchy refrain that Big Business would be proud of. These flirtations with less obvious arrangements are felt throughout the record and whilst they might not be executed to their full extent, they welcomingly fill in the gaps between the two islands Red Fang inhabit.

‘I Am a Ghost’ closes the record with a drum-rolled discordant opening that plunders into a double-time chorus. Halfway through, the band venture into more proggier territory with an extended jam that illuminates their willingness to expand their musical palette.

When taken as a whole Only Ghosts may lack some of the standout moments of their previous records but the band’s decision to expand their compositional horizons is a welcome one. By both tightening and increasing the connecting threads of their two distinct sounds, Red Fang’s fourth long-player harbours an increased musical depth whilst still providing their trademark singalong moments. This record could prove to be a turning point for a band attempting to consolidate and expand their sound. The important question is, who will they be next? 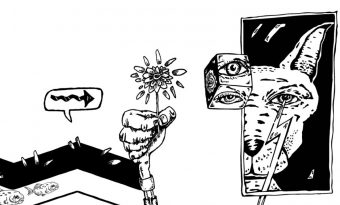