I’ve had a few friends move to Canada recently. While it’s a struggle to understand why anybody would choose to leave the UK for somewhere colder, it seems to have worked out well for those concerned: one of them has gotten addicted to poutine, while another is now the proud owner of a dog named after cult author Breece D’J Pancake.

Yet it seems wet chips and fictional dogs aren’t the only benefits to life north of the North American border. Irish musician Michael Orange (a dangerous name north of his own native border, one assumes), has gigged as a drummer for countless Dublin-based bands in the past, including The Star Department, Subplots and Autumn Owls, but his debut solo album as Feather Beds suggests his relocation to Montreal has burst a creative vein.

It’s clear from the moment the glimmering introduction of ‘Walter’ finds some thrust from a softly thumping drum and sets off into the sky, recalling Animal Collective when in a particularly reflective, meditative mood (rather than bouncing off the walls after being told they can’t go out to play). Even the scattershot snares and crashing cymbals that clatter in towards the end are somehow neutralised by the layered production; it’s like a swarm of killer bees suddenly stopping off to sample a field of opium poppies. Or listening to an album by The Microphones but with all the edges rounded off and covered with silk cushions.

Those sharp corners are still there under the surface however. “It’s so easy to get lost these days,” sings Orange on ‘Animal Fat’, “But I’ve been lost for years / That’s what they’ll say / Cracked spine and my ribcage.” The title of ‘On Your Deathbed’, repeated over a disjointed guitar phrase, also adds a sorrowful edge to proceedings, which are shaken up like a kaleidoscope towards the end.

It’s an atmosphere that Bracken/Hood man Chris Adams has conjured in the past, and the lyrical/musical combination has rendered unnecessary my plan to trap Thom Yorke and Bradford Cox in a lift together. (In order to make music, you understand. I don’t just want to disrupt their day.)

The slightly creepy ambience of ‘Swimwear’ is like an idyllic jungle lagoon you’ve been warned is full of snakes, while the fluttering ‘Actress’ is the sort of rare specimen our favourite Bristolian Oliver Wilde would be proud to capture in his net. The equally snug ‘Gunt Nuzzler’ feels like curling up in a warm, comforting place, which unfortunately seems a bit sordid once it clicks what the title is actually referring too.

There’s more appropriately inappropriate nomenclature on ‘Seal Clubbing’, the muffled drum solo of which soon snatches you out of any slumber you might’ve slipped into. Yet however much discord or abrasion Orange floods his music with, it never seems to wreck the overall feeling of blissful contentment. Indeed, by the last couple of tracks he seems to have accepted this; they’re as pleasant to sink into as a hot bath, complete with novelty rubber ducks.

Yet even at its most luscious junctions (and there are many), there remains a plethora of hard, brittle sounds buried underneath the surface. In this sense, The Skeletal System couldn’t have been better named. Like the human form, it may appear beautiful on the surface (depending on the human in question), but it’s the mechanics underneath where the magic, in all its complex, visceral glory, really happens.

Yes it’s pleasant to recline upon the softer sounds Feather Beds has plumped up for us, but the musical bones underneath them are certain to stop you actually being soothed into sleep, and will ultimately reward repeated visits. Stay in Canada, Michael. It’s obviously doing you good. 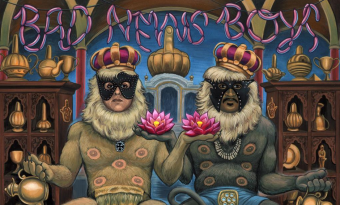