This month London will be giving all its electro-savvy European rivals a run for their money, courtesy of the Convergence Festival, back with a vengeance after its inaugural year. The festival isn’t of the mud and wellies variety, but rather a series of rainproof gigs, discussions and workshops centred around the ‘convergence’ of music, art and technology – apparently a projector churning out Nosferatu to assorted Avalanches tracks just doesn’t cut it anymore.

Curator Glenn Max has said he is “thrilled to present such a rich array of era-defining artists and honoured to offer this event to London as an inclusive, dynamic dialogue about our shape-shifting cultural epoch.” We think what he means is that he’s got some bloody good stuff lined up.

It’ll be kicking off with a stellar opening party on Thursday 12th March, where Clark, Vessels and Rival Consoles will no doubt set the bar high with their euphoric brands of slow-building electronica. If you’ve got round to Vessels’ shiny new album already this week, you’ll be as excited as we are to see their two central drummers attack the samba finale of the epic ‘Elliptic’.

Don’t worry if you can’t make that night but still want to catch Rival Consoles’ multi-instrumental sound experiments – he’ll also be flaunting his wares at St John-at-Hackney Church all weekend, along with the dreamy Kiasmos, Dorian Concept and Vessels (in DJ mode) on the Friday, and the darker Tricky and Gazelle Twin on the Saturday. Given the awe-inspiring church setting and diverse company he’ll be keeping, it’s starting to seem not such a far-fetched idea to pay to see the same guy three times in a week. Hmm.

The above essential viewing complete, you may then want to get a bit more selective about where and when you converge with Convergence – unless you intend to spend the entirety of March ricocheting around Shoreditch in a laser-induced daze. Here are some highlights, handily ordered according to what you might be hoping to get out of the month, along with a handy Spotify playlist…

I want to deepen my understanding of the multifaceted ways in which music, art and technology converge, past, present and future…

… in the funkiest way possible. Disrupting the stream of introspective twenty and thirty-somethings, legendary funk pioneer George Clinton will be in town to chat about his instrumental role in bringing P-Funk to life through the seventies and beyond, and how technology has served him on his journey. Here’s hoping for an in-depth tour of the mothership, a perfect coming together of music, art and outer space technology if I ever saw one.

We’ll be leapfrogging spring into summer at the Tropical Beats Party on Thursday 19th. 1970s Angolan music and modern electro aren’t two phrases you hear in the same sentence very often, but Angolan-Portuguese Pedro Coquenão’s project Batida combines precisely those two things, whilst at the same time spanning an ambitious range of media including dance, poetry, graphics, photography, radio and video. It’s like he ticked every box on the Convergence festival application form.

The Institut Francais wanted in on the party, so they’ve got together with the likes of Andrew Weatherall, Eat Lights Become Lights, White Noise Sound and Mental Overdrive to present the ‘Boom Room Launch Event’ on Monday 16th March – a show dedicated to the reverb. It all sounds very intriguing, effectively turning the Village Underground arches into a sound chamber and using broadband to relay the sounds around in real time. I can’t quite picture it, but that makes me want to go more. Upcoming French sound artist Saycet is also on the bill – here’s hoping he cracks out his mesmerising track ‘Volcano’, featured on the very excellent free compilation accompanying the festival.

This one’s pretty special. Matthew Bourne (the jazz pianist/synth extraordinaire, rather than the choreographer of the first all-male Swan Lake… which I would also have been intrigued to see), Franck Vigroux and installation artist Antoine Schmitt have got their hands on Kraftwerk’s Radio-Activity, and are planning to present their version of it on Saturday 20th March. But don’t expect a pedestrian regurgitation – there’s going to be some pretty out-there instrumentation going on, mixing up analogue and digital, together with live video courtesy of Schmitt. Make sure you get there at 7.30pm sharp, by the way – this one’s ageing-krautrocker friendly, with a cosy finish time of 9pm.

I do not want to spend money

Back in December, I advised fans of the late Portico Quartet, recently risen again simply as Portico, to get themselves to a live show and make up their own minds about the new electronic set up of these jazz prodigies. Now is your chance – we’ve got tickets to the official launch performance of new album Living Fields up for grabs (see below), with support from the excellent (and haiku-inspiring) Snow Ghosts. We’ve also heard resident light technician Lewis Howell has got some tricks up his sleeve for the night, which Portico’s newfound rich textures and synthy soundscapes should align with beautifully.

So that’s the surface scratched of the Convergence agenda this year – definitely check out the rest of the events lined up, where Gary Numan, Pantha du Prince and Herbert are all lurking, along with a ton of panels and workshops designed to help you nod along in a more knowledgeable way to the rest of the year’s electronic offerings (and even produce some of your own). Stay classy ’til next Thursday, when we’ll see you at Rivals Concept, Mark One…

Like the sound of Convergence and want to to get involved? Of course you do, so why not enter our competition and win yourself a pair of tickets to Portico’s album-launching performance at Village Underground, with support from the splendid Snow Ghosts. Simply retweet this tweet or share this post by Thursday the 12th to enter. Entrants must be over the age of eighteen, and winners will be announced on Friday the 13th, which contrary to convention WILL be lucky for some… 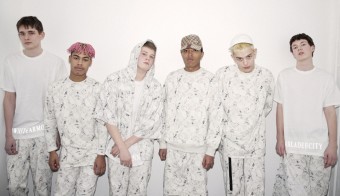 FKA twigs was among those who witnessed much-hyped Swedish teenager Yung Lean getting his sound snipped at the Barbican, but not before he had the crowd standing on their seats...
Read More