It’s around 7:55pm on a Monday night in London’s expansive Barbican, and in the food hall FKA Twigs is ordering a coffee. She’s here to see Swedish cloud rapper Yung Lean, and so are The Monitors.

Tonight, the Barbican is playing host to Lean and the Sad Boys, and it’s fair to say this kind of show isn’t what you’d usually expect to see here. In an auditorium setting, it’s ambitious but it’s exciting. The venue did host streaming channel Just Jam’s showcase with D Double E, General Levy and Novelist back in December following the original event getting cancelled in March on “public safety grounds”, but this kind of thing still isn’t a regular occurrence around these parts.

In the lobby before the show, there’s a sea of bucket hats, 1990s Ralph Lauren and reflective jackets. In fact, if you didn’t know any better, you might think this lot had just come from London Fashion Week (which is due to come to a close tomorrow). At the bar, a dark-haired girl talks enthusiastically in a completely alien-sounding language, suggesting that there are fans from Lean’s home country of Sweden in attendance.

An unnamed DJ playing futuristic, icy sino grime beats is warming up the hall space with a visual backdrop of flames raging. It’s not long before he exits and the flames disperse, leaving the hall in darkness. Screams go up from the now populated auditorium, and two figures dressed all in white enter the stage.

One takes his position behind what can be assumed is a laptop and mixer setup, although these items are draped in black cloth so as not to take away from the projected visuals above. The other figure takes a seat by the side of the DJ setup and begins to drink from a large brown glass bottle, which he continues to do for the rest of the set.

Suddenly, on the projector screen flashes an image of a glowing, frozen cavern, crisp and clear with the HD aesthetic that Yung Lean’s artwork is known for. Over the next few minutes the image slowly edges closer into the cavern, into the pitch-black cave at the centre of it all. As this image creeps closer in, there’s a wall of pure synth sound building and building. It’s at this point Yung Lean enters the stage, and he too is dressed in an all white long-sleeved t-shirt and white basketball shorts with turquoise piping. He stands solemnly, with his hands behind his back, switching between staring up at the ceiling and looking at the floor.

With this, the show is under way and Lean treats his fans to some of his biggest and catchiest tracks. ‘Ghosttown’ from his debut album Unknown Memory is a particular highlight, although unfortunately Travis Scott isn’t here to perform his raps that feature on the original track. Lean doesn’t come across as someone is born to own the stage, but he is only 18. His movements are restricted to hand gestures and he rarely moves from his spot behind the microphone stand, but the projected visuals behind him make up for this.

There are beautiful sunsets, polar ice caps, lakeside views, red roses, skulls, anime, water trickling down a rock face and green forestation all providing a backdrop to Lean’s laidback, autotuned trap beats. If it wasn’t for the immersive projections, the show could be in danger of becoming a tad dull.

Despite Lean’s lack of onstage antics, this doesn’t stop his die-hard fans down the front from getting worked into a wild frenzy. Tunes like the gorgeous ‘Ginseng Strip 2002’ (reminiscent of the productions of Clams Casino), ‘Blinded’ and ‘Kyoto’ all provide the perfect fodder to have the crowd standing on their chairs.

‘Kyoto’ (arguably Lean’s biggest track) is the one that brings the show to a premature end. It proves too much for the hyped fans in the front rows, and they flood onto the stage to mob Yung Lean while he does his best to remain calm and continue rapping. The Barbican aren’t feeling it though, and the lights are promptly brought up and the music is abruptly cut. Boos ring out from Lean’s passionate young fans, but it’s clear that he’s sadly not coming out again.

While Yung Lean’s showmanship hasn’t developed that much yet, his fanbase is undeniable and he’s still so young. Either way, to put on a show at the Barbican is a triumph. Lean has plenty of time to develop his performances, and his music is constantly improving. He’s pencilled in to play at Barcelona’s Sonar in June, which promises to be another great gig for the Swedish youngster, so if you’re out there, go check him out. 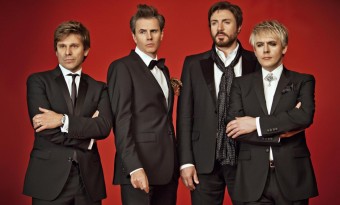 Eamon Murtagh may have looked back at Duran Duran with the same horror as he did his 1983 wedge haircut, but an unexpected opportunity to see them live prompted a stark reappraisal...
Read More