Sometimes there’s nothing like leaving your desk behind, shoving some sensible hiking shoes into your backpack and heading out into the hills for a weekend in the wilderness. OK, so the actual camping bit isn’t quite so appealing – there’ll be plenty of time to spend zipped up in synthetic fabric when we’re in the morgue as far as I’m concerned – but the feeling of being amongst nature, with raw earth under your feet and genuinely visible stars over your head, is a balm for the soul.

Until, that is, you have to return to your office. Still slightly smelling of campfire, and haunted by the knowledge that the only bit of nature you’re likely to commune with during the working week comes in the form of a turd, sloppily laid outside the building by a springer spaniel with a dicky tummy, that you’ll inevitably step in during your lunch break. Sigh.

Clearly sonorous six-piece Toliesel have experienced this feeling many times after rambling through their native Oxfordshire, if the video for ‘Bones’ is anything to go by. In the clip (borrowed from an advert for some sort of fancy incense), a man with a beard so colossal it probably supports a comparable ecosystem to a small patch of woodland in itself, finds himself sinking into a blissful revelry as he recalls a recent camping trip. Chopping wood, gazing at waterfalls, marching around with a big old stick while probably pretending he’s Gandalf; our hero does the lot. Only his mic-ed up headset reminds us that it’s all just a fantasy, and he’s actually still in his office.

Luckily, by building a small fire out of ‘Campfire Cologne’ on his office desk, he’s able to fool at least one of his senses that he’s still in the great outdoors. And to be honest he’ll probably be spending a lot more time there once the head of HR hears he’s been starting fires in the workplace. Ah well, it was worth it.

Not having any Campfire Cologne to hand, it’s up to Toliesel to help whisk the mind away, which they do with enough aplomb that we’ll overlook the amount of repeated footage in the vid. They may be from Oxford, but the band’s toe-tappin’ alt-country rock is so Great American Outdoors it should probably only be listened to in a remote log cabin, using the talon of a bald eagle as a stylus. So stick it on, shut your eyes, and let yourself soar off into a cloudless sky forever. Or at least until your boss comes back from lunch. 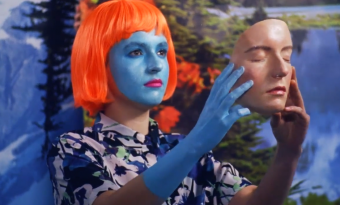 Stealing Sheep rustle up some 16mm psychedelic visuals to mark their return to the flock, and seem to have slipped a few tasty synths into their lo-fi pop pudding as well...
Read More