Two years ago a young Oxford-based quartet was spotted playing a live gig of their more than unorthodox music by none other than Adele svengali, Paul Epworth. Wham bam and they were signed to Epworth’s Wolf Tone label.

Half a million physical sales later, their debut album Zaba has become a multi-platinum worldwide hit, scoring a massive 200m streams on Spotify alone. The ‘they’ in question are Glass Animals, and the reason we’re here today is the release of their second album, How To Be A Human Being.

Crafted from fragments of off the cuff remarks, storytelling and casual conversation, including the odd rant, the album was recorded by frontman and band founder Dave Bayley while the band were on their last world tour. ‘How To Be A Human Being’ is for all intents and purposes a sonic drama series broken into eleven colourful episodes featuring very disparate protagonists and themes.

Episode one is the explosive ‘Life Itself’, a melodramatic, compelling, pan-Asian, dark pop fusion.

The scene is set in a serpentine tabla jungle on the periphery of enlightened genre-fluid wonk. Comprised of a gaggle of jangles, propulsive percussion and an elephantine synth thrum whipped and driven by growling guitar, this gleaming yet claustrophobic pop compulsion wears its gritty undergarments well. A sharp script fixes a grim realism into this exotic instrumental mood-board, this North London heart of darkness with its post-monsoon afterglow.

“I’m waking up, lost in boxes outside Tesco
Look like a bum sipping codeine Coca-Cola
Thought that I was northern Camden’s own Flash Gordon
Sonic raygun, gonna be a superstar”

Listening to second track, ‘Youth‘, is like sleep-walking into a dreamy soundscape curated by a heavenly host of multi-instrumentalists. Twittering flutes, bootylicious bongos and lingering guitar licks all congregate to play hosanna to Bayley’s golden-toned vocal. Singing from the “other side”, Bayley assumes the persona of a dead father talking to his son. It’s a sweet, heartfelt song, awash with ethereal harmonies and an uplifting melody, and makes for one of the lighter, more heartwarming episodes of the ‘series’.

“Boy, now your life is back-to-front
But you’ll see that’s not for long
Cause I know you’ll feel the ghost
Of some memories so warm”

Two in and it’s clear that one of this album’s USPs is its gyrating synths and looping guitar sequences. Very Michael Nyman. In fact, I can’t remember coming across as many looby loos since Andy Pandy was a youngster!

‘Season 2 Ep 3‘ is a cheeky little R&B number with more undulation than a water bed on a wedding night and golden delicious vocals that are très Timberlake. In fact, the whole thing is very Trousersnake in a slowed down, sexed up, slinky kinda way.

Lyrically, ‘S2E3’ stopped me in my tracks. Standing ovation please for David Bayley’s off-beat lyrical prowess bestowed with a vigorous perspicacity unequalled by many of his peers. In fact, I can’t help wondering how entertaining a long night in the company of Glass Animals would be, stowed away in the corner of a quiet pub, with a lot of single malt on tap!

“Maybe, I wish I could remould you
To vertical and golden
But you turned to Styrofoam,
And so it hurts to say it’s hopeless
And we ain’t gonna make it”

We’re just getting into our dramatic stride when ‘Pork Soda’ (me neither) grasps us by the hands and, like Spike with the ever calamitous Tom, whaps us all over the joint. Dark, crazy, funk soul brother laced with acerbic reminiscences, this is an ‘unlove song’ with a lot of “you had to have been there” speak. Its vibe is Congo Sapeurs on a trip-hop bender with a lot of shoe shuffle and ting.

“Pineapples are in my head, got no-one cos I’m brain dead”

Do not adjust your sets! Our next instalment in this ‘life stories’ series, ‘Mams’s Gun‘ opens with a sequence that could have been lifted straight out of Tchaikovsky’s Nutcracker. A wondrous gossamer of a thing, it darts and dances under a semi a cappella vocal until it’s joined on stage by a retro flute accompaniment in the mould of Jethro Tull, and thereafter some very hip thump-wump drums accessorised with a blush of windswept harmonies.

Moving from track to track through this album is like flicking through a Dulux colour card full of multiple varieties, hues, tones and textures. How To Be A Human Being is an album constant only in the quality of its musicianship, imagination, lyrical perceptiveness and acuity.

If it’s diversity you’re looking for, hit track seven. 36 seconds of f**kin’ brilliance (hey if it’s OK for them to use the f-word!). ‘Premade Sandwiches’ is slam performance on so much speed you can feel it bulleting through your brain like Usain Bolt. This ‘insert’ is yet another indicator of Glass Animals’ off-the-wall creativity.

In many ways album omega ‘Agnes‘ is the perfect bookend for a record that crosses such a broad and eclectic spectrum. The most mainstream pop ‘tune’ on the album, it’s also its finest wine. A litany of melancholia so visceral it leaves the nerves shot; a sensation so raw that the pleasant melody and gentle vocal, which are in themselves a counter to the stark, disconsolate lyric, cannot render it impotent.

Bullish guitars drive the pace of this highly charged, atmospheric melee to which the addition of space age electronic vibrato and military drumming give added potency. ‘Agnes’ is three mins odd of life’s highs and lows imagined with such bombastic creative spark as to make it the album’s most memorable offering.

“And so it goes,
A choking rose back To be reborn,
I want to hold you like you’re mine”

If you’ve never heard of Glass Animals, How To Be A Human Being is the perfect introduction to their music. An album steeped in all the emotion, existential crises, and societal sludge that humanity has to offer, this sonic dramatisation could be termed ‘reality music’. A glass menagerie filled with a myriad personalities, it is both beauty and beast, everyman and none. A musical feast to gorge on and then go back for more.

Glass Animals is Dave Bayley (Lead vocals/Guitar/Tambourine), Drew MacFarlane (Guitar/Keys/backing vocals), Edmund Irwin-Singer (Bass/Keys/Backing vocals) and Joe Seaward (Drums). How To Be A Human Being is out now via Caroline Intl/Wolf Tone and available in all formats from the usual sources, including Glass Animals official website. The band have just announced a UK&I tour, which includes Bestival (10th Sept), London’s Roundhouse (25th Oct) and *cough, cough* Dublin’s Olympia (29th Oct) 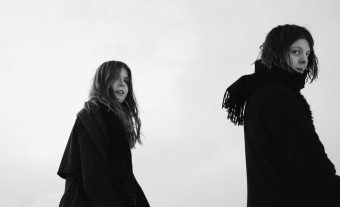 Pascal Pinon's 'Sundur' is a Pandora's Box of everything and nothing, clothed in vintage and futuristic tailoring of exceptional quality, accessorised with love.
Read More