It feels like donkey’s years since Liverpool trio Stealing Sheep rustled up something for our ears, so it’s pleasing to confirm that the band’s forthcoming album Not Real is actually very much real, and due to hit your eardrums in April. Tremendous.

Even more tremendous is this video for the album’s title track, which shows that they’ve lost none of their love for the endearingly surreal. With sets and costumes of a distinctly sixties style and a grainy, colourful quality reminiscent of a cutesier Derek Jarman, ‘Not Real’ finds Stealing Sheep at their most playful. Masks, mirrors, paint and solar flares; they barely leave a single psychedelic trope in the box, while some of the poses and movements also bring Soviet propaganda and directors like Věra Chytilová to mind.

The music, however, is classic Stealing Sheep: chirpy, tuneful and full of the sort of harmonies you might find at the end of a rainbow. Some skittling percussion and playtime synths add to the fun (the latter perhaps an appreciated hangover from last year’s collaboration with the Radiophonic Workshop), while the chorus is catchy as hell. It all sounds like the lo-fi pop song Stereolab always had locked away in the vault.

This sort of rough bubblegum sound may stem from the band’s approach to writing their second album. “We started off in pre-production doing all the demos ourselves,” says the band’s Becky Hawley. “The demos captured an atmosphere that we wanted to carry forward to the album. The result was a hybrid of casual takes and more considered recordings.”

The video, directed by James Slater, seems to benefit from a similar approach; the 16mm film and blotchy wipes can’t disguise just how meticulously well-staged and shot it is. Let’s hope the album offers a similarly complementary mix.

Metz make their pancakes out of 'Acetate' 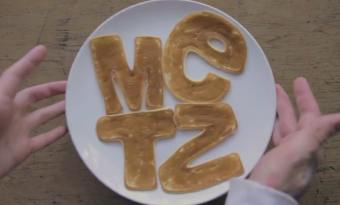 You may think you can toss a pretty tasty Shrove Tuesday pancake, but we doubt you can create anything as cool as the Metz-related examples in this video...
Read More