Judging by their name, you could be forgiven for thinking that The Moondoggies are some sort of tribute band to The Viking of 6th Avenue himself. However, there is not a trimba nor ooo-ya-tsu in sight on the band’s third album. Instead, the Washington band trade in more traditional music from that era, namely good old, down-home, head-nodding, beer-drinking rock. And what do they say to people who claim that rock ‘n’ roll is dead? Frontman Kevin Murphy gives them the shortest of short shrift: “I think it’s all gibberish”.

Certainly he and his cohorts put paid to the myth that there’s no mileage left in this sort of thing, and there’s a sense that Adiós I’m a Ghost is the band’s most accomplished release to date. Bolstered by long-time friend and multi-instrumentalist Jon Pontrello finally joing the band full-time, Murphy has been bullish about that band’s progression, claiming, “This is the band we hear in our head beginning to be realized”.

So what does that heretofore imaginary band sound like? Well, for the most part, balls out, guitar and organ driven Americana is what’s slowly charring on the grill, with considered compositions like ‘Red Eye’ suggesting Daniel Rossen writing for Alabama Shakes. ‘Start Me Over’ is an impassioned waltz performed with plenty of gusto (and without particularly worrying if it treads on its partner’s toes), and ‘A Lot To Give’ releases a riff that rambles along like a fat possum before a fluid, spacey instrumental washes it away.

If anything, they’re even better when they take their foot off the gas. ‘Annie Turn Out The Lights’ wanders along those same desolate, lamp-lit lanes that Tarnation used to travel down, while the minimal instrumentation of ‘Pride’ sees the song smoothly exhaled outwards, like the sigh of a man “shit outta luck” as he prepares to knock back the dregs of his last drink. As befits the title of the album, there are a couple of gently haunting moments here.

If anything, it’s a shame there aren’t a few more of them. The album suffers from having a little too much alt-country by numbers; forthright single ‘Midnight Owl’ is about as exciting as watching a woman weighing up a couple of capsicums in a grocery, while ‘One More Chance’ is an unadventurous stomp. If someone asked me for one more chance in such a jaunty yet jaded fashion I’d be inclined to refuse.

Apparently this is the most ‘live’ album the band has recorded, and this really comes across. You can feel the band enjoying the dynamic shifts of songs like ‘Back to the Beginning’, and even if they do occasionally flirt with sounding like Mumford and Sons if they sported stetsons rather than tweed, their enthusiasm is infectious. There’s an authentically sixties feel to ‘Don’t Ask Why’ too, as chirpily convincing as anything off The Bees’ Free The Bees album. A vocal refrain lurches from side to side like a cheerful drunk, while a gorgeous guitar line soars in at the end like a big bloody golden eagle.

Ultimately, there’s an argument that there are enough bands around aping the likes of CCR, the Allman Brothers and The Band. However, The Moondoggies do it better than most. Murphy may complain that his band are often dismissed as part of the “flannel and bearded” brigade, and to be fair it’s not without reason – I’m pretty sure my beard became about 35% more fulsome after listening to this record a few times. But there’s a time and place for countrified beard rock, and The Moondoggies are a perfect fit when that slot arises. 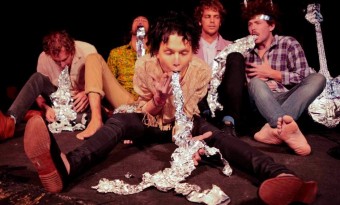 A love letter and a greatest hits set all at once, the lastest from POND is an absurd but entartaining piece of work...
Read More