It’s been quite an eventful journey for Mr Panda Bear, Noah Lennox. From being one of the architects of leftfield psychedelic/electronic melody makers Animal Collective, who built such momentous force over the past 10 years, to guest appearing on one of the biggest albums of the century so far – Daft Punk’s Random Access Memory – he still finds the time to produce and release his own solo output. Lennox is as expressive as ever on this, his fifth solo outing, which courts themes of life, death, loss and new beginnings.

As with his last record, 2011’s Tomboy, Lennox is joined by producer Pete ‘Sonic Boom’ Kember (ex-Spacemen 3). Much like its predecessor, … Meets the Grim Reaper is often succinct, dense and tight with a real musical evolution running deep within, but its themes refer back as far as Lennox’s 2004 release Young Prayer (which dealt with his father’s death). It’s clear this is a record that comes full circle.

The intro to opener ‘Sequential Circuits’ sounds as if Noah is entering the underworld on his little row-boat, featuring glorious dripping slabs of synth as he wails “Dread follows that lead / Follow the lead / Near as far from a ship as the oar” before entering the pearly gates and unveiling the killer lead single, ‘Mr Noah’, a brilliantly imaginative kaleidoscope of colours, textures and dog barks which you wish would last forever on an infinite loop as it tries to achieve its goal (seemingly from the point of view of a dog!) “Brittle mind, gentle mind / Toward a bigger sign / Every time, every time / So much for the safest vibe / Tossed aside / But he burns like a blaze inside.”

I recall seeing him play the majority of these songs at an ATP performance, and what struck me vividly during that afternoon set at Camber Sands was how instant the impact of the songs was; the harmonies, the beats, the swells of noise swirling. Listening to …Meets the Grim Reaper, it’s comforting to know that these songs haven’t lost that initial charm. ‘Butcher Baker Candlestick Maker’ oozes with an aching warm fuzz of synths which could have been cut from the Flight of the Navigator sound track.

I guess I’ve always thought of Lennox as the Animal Collective member with the most pop tendencies, from his infectiously catchy refrain during ‘My Girls’ to his guest vocals on Daft Punk’s ‘Doin’ It Right’ which seem to immediately grab you. Inside your brain. And don’t go away for days. A personal favourite on this record is ‘Crosswords’, with a mid-’90s RnB beat and piano chords underpinning his heavenly Brian Wilson sunbeam melodic loops, as he gratefully contemplates his life luck and sings “So good, so good / You got it so good / Damn it, so good / Day after Day / So good!” It’s absurdly optimistic and upbeat but makes you think of a person who’s not counting his chickens and savouring every moment while it lasts. ‘Boy’s Latin’ follows in the same vein, with its sampled vocals taking on each other through some lyrical sparring and a more negative outlook on life – and the weather. “Dark cloud descended again / And a shadow moves in / And a shadow moves in the darkness”.

The record reaches its glorious climax during its centrepieces of ‘Come to Your Senses’ (where Lennox pleads and pleads the question of “Are you mad?”) and ‘Tropic of Cancer’ where he confronts his father’s death (as earlier referred to on Young Prayer). After its dreamy harp arpeggios lull you in, it can’t help but evoke images of ascension. Floating towards clouds. The utter despair of losing all that you hold close and dear, as he resignedly sings, “You get back, you wont come back, you won’t come back.” It’s depressing as hell and I won’t lie, I got a little emotional when I saw him play this in its early stages during that ATP set. Sad but strangely comforting.

‘Lonely Wanderer’ begs to look back at your life over descending, plaintive piano notes which hark back to the brilliant 2nd half of Animal Collective’s Feels (notably ‘Loch Raven’) as he asks “What have you done? What did you do? How do you feel? Was it worthwhile?” It’s personal. It’s dreamlike. It’s insular. It’s honest. It’s perfect music for headphone listening on a journey. I’ve listened four times already and am still discovering new aural treasures on each revisit.

‘Shadow of the Colossus’ references the classic computer game of the same name, the sole basis of which is to voyage through beautiful landscapes on horseback for 10/15 minutes at a time. With no one else around to distract you, you can take in the surroundings of rolling fields, epic sunsets and sandy terrains (all before encountering mammoth beasts which you have to defeat, of course). The scope is the same. The consumption should be too.

It ends with the couplet of ‘Selfish Gene’ and ‘Acid Wash’. The former could’ve made the Drive soundtrack, as Lennox coos about how things can appear not as they seem, “When at the start it seems like fates / Have set it up like so much magic / Just a ruse to get you in there.” The cathartic ‘Acid Wash’ is a clanging dirge with lazers of beaming electronic pings, as he makes peace and moves on to the next plain.

Panda Bear Meets the Grim Reaper is a rewarding journey and one you’ll want to take again and again. 2015 may only be thirteen days old but it’ll take one hell of a record to top this one. 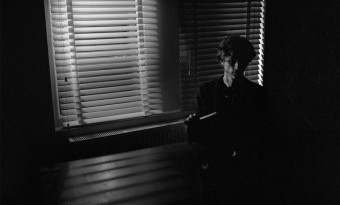 The first great record of the year didn't take long to arrive, and Ghost Culture's immaculate debut also provides a welcome distraction to a not especially harmonious start to 2015...
Read More