‘They don’t call it Melt Festival for nothing!’… was the worn out witticism which grated against my very soul by the end of July’s sun-drenched post-industrial hoedown in Ferropolis, a disused quarry in the backwaters of former East Germany. In fairness, my overriding memory of the festival is just… hot. The temperatures were such that my bag of Minions Haribo fused itself into one Flubber-esque blob. We spent the daylight hours gaping like fish in the scanty shade, with no choice but to throw ourselves into the Gremminer Lake when we could endure it no longer (note to self: all future festivals absolutely must come with lake).

But once the sun slinked beneath the horizon, we were drawn as moths to the colossal disco balls which hung from the old mining machinery and presided over five sunken stages. It might all sound achingly hip, but the BPC (beards per capita) actually fell pleasantly short of the averages currently being experienced across European capitals. The people were there for the music. And the music was what we received.

Admittedly, things started slow. The teenie boppers of our festival troupe insisted that we go see Haim, whose present popularity makes me lose my faith a little bit. Them and their spindly legs rattled around the stage from one tinny 3-minuter to the next, punctuated with some of the most cringe audience chat I have ever heard (formula: insert the eff word into most grammatically impractical part of any cliché audience shout out: ‘You guys fucking look awesome tonight!’ ‘We love you Melt fucking Festival’). They were nearly redeemed by an admittedly kick-ass cover of Fleetwood Mac’s ‘Oh Well’. Nearly.

Things properly got going when we piled into the baking Intro tent and awaited the appearance of Darkside, the Brown University duo currently flaunting their spacey debut on the global festival circuit. Refreshingly, after Haim, these two guys didn’t deign to speak one word to the audience. They strutted onstage in a puff of smoke and delivered what I would argue is the most masterfully paced live show happening this year. With Nicholas Jaar teasingly delaying the central riff/leitmotif/weird electronic noise of each ten minute movement, and Dave Harrington picking his way to the apex, they left us indulged and awestruck. Emerging at 1.30am from that hazy pleasuredome, we had to ask ourselves if we’d peaked too soon. My sister, ever pragmatic, brought us back down to earth with the constructive criticism that ‘There could have been more words’.

On Saturday we hit the mulled wine (read: Lidl box wine specially tent-brewed for 12 hours at 35+ degrees), and as such the likes of Of Montreal and FM Belfast could do no wrong. I was riding the wave too intensely to be able to report back anything particularly constructive about their sets, but I can say that this unbroken happy spell was very much facilitated by the excellent organisation and structure of the festival – even at the biggest acts, a balance was struck between space to dance and a crowd big enough for a party. With stages mere seconds away from each other, the joyous musical episodes flowed more seamlessly than a Netflix binge. Well done Germany. We can always count on you.

Satdee night highlights included The Notwist and WhoMadeWho. I had vaguely appreciated the latter’s driving indie beats previously, but on stage these smartly-dressed Scandinavian firecrackers radiate a plain old-fashioned enjoyment which is infectious. Extracting energy from my sun-battered body at that stage of the evening was no mean feat, but Jeppe, Tomas and Tomas carried me, and for this I thank them with a special mention.

I must now admit that my Saturday night lowlight was Four Tet. I swallowed my inner pop-mongerer and dismissed the prospect of Metronomy in favour of the connoisseur’s choice. Frankly I would have much preferred to yell out city names to ‘The Bay’ than nod along knowledgeably to the curly-haired Londoner’s sophisticated house set. Adorable though he is, his experimental and meandering live approach just didn’t match up with the laywoman’s expectations of a festival set. Maybe I hadn’t consumed the right substances beforehand. Maybe the slippery sandy slope underfoot made me concentrate more on standing up than the prodigal display before me. Maybe I’m just not cool enough.

By Sunday, the tents had been abandoned in favour of sleeping lakeside. We watched the sun rise as Alle Farben’s 4-7am set resonated across from the quarry. We repeatedly hit ourselves in the face as the spiders tried to get cosy alongside us. It was pretty special, all in all.

We panted through a final day of sweat and sunshine, and our reward was an absolute powerhouse of a Sunday night line-up – the sith lord (synth lord?) SOHN, a laser-happy Moderat, an introspective Portishead, and finally Bombay Bicycle Club, the one act of the weekend my sister had heard of (I should mention at this point that my trip to Melt was thinly disguised as a 21st birthday present for her, in order to avoid eternal family berating for swanning off to German Technoland during this Big Life Event. So she just had to come with).

The above depicts a very decent music festival, albeit one which really can really be found anywhere in the world this summer. But my favourite Melt Moment – feel as if this hashtag leads to a Cadbury marketing campaign? – brings this festival firmly back to its central European roots: Bilderbuch. This poppy rock band from Vienna were a tip-off for us ignorant Brits from a German friend whose band toured with them back in 2012. Their set was an anomaly in between the otherwise ubiquitous on-trend electro, and the crowd guzzled it. And only a Germanic crowd knows how to receive the song ‘Softdrink’, with the chorus ‘Coca Cola, Fanta, Sprite, 7Up, Lemonade. Alright, alright, alright, OK’ with such unbridled joy. I don’t know if I’d ever buy their CD, but for ‘sheer entertainment value’, for frontman swagger and for electric guitar solos played behind one’s head, Bilderbuch had no rival at Melt. If they ever come to London, you’re all invited. 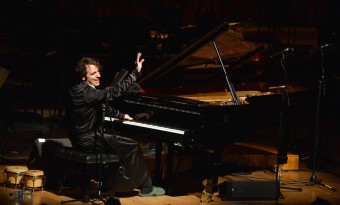