I have a friend who could be described as a lapsed Catholic, except the term ‘lapsed’ isn’t really strong enough for him. Indeed, his distaste for the Church is such that he recently began to look into getting excommunicated.

Now in Catholicism, excommunication tends to be something that is forced upon you with the intention of convincing you to change your ways, rather than some sort of spiritual exile. It’s not supposed to be something you seek out in order to separate yourself entirely, as the last thing any organised religion wants is to lose followers. After all, even if those followers hate everything you stand for, you still own their souls.

As my friend isn’t currently serving in ecclesiastical office, the many (many) sins he commits aren’t of enough interest to the Vatican to necessitate excommunication. So he tried to see whether he could volunteer himself for it, seeking the advice of a trusted local priest called Father Willy (congratulations if you managed to suppress a juvenile chortle there). I can’t remember the exact ins and outs of the information he received except that it was quite complicated, and as yet he grudgingly remains a lapsed Catholic as a result (or a pre-excommunicated Catholic, perhaps).

Chilly Gonzales, the self-proclaimed musical genius whose talents run the gamut of hip-hop, pop, dance and, most successfully, solo piano, is Jewish (lapsedness level: unknown) rather than Catholic, but he is still targeting the lapsed. Not Catholics, however, but pianists. In a project that combines his twin strengths of musical enthusiasm and canny marketing, he’s recently published a book of piano pieces, Re-introduction Etudes (listen to the Soundcloud below for more information from the maestro himself), aimed at the many, many people who took up the instrument briefly as a hobby or were forced into inevitably abandoned lessons as a child, as well as those seeking their first introduction to old Joanna.

night is the last of a series of lectures and performances to promote the book. Arriving onstage in his trademark bathrobe, he begins with a recital of some pieces from his celebrated Solo Piano albums, which are as deftly delightful as always, before taking to the mic to explain why we’re all here. The ‘masterclass’, he explains, has its origins in composers such as Liszt giving tuition to the privileged, although generally to very small groups rather than a packed Roundhouse. The idea is that we leave with not only melodious musical impressions left on our memories, but a greater understanding of music itself and a heightened appreciation for the piano as an instrument.

A typically grand aim, although it’s clear early on that his ability to acheive it depends largely on individual audience member’s existing knowledge. Of the party of five I’m there with, three of us are performing musicians and piano is the weapon of choice for two. Thus, the introductory lesson at the beginning was tediously basic for the majority of our group and, I would wager, the audience as a whole. Nonetheless, with Chilly as host the evening is never boring, and he wisely brings focus to proceedings by hauling a youngster called Joe on stage to help with some examples.

The kid, who sent a video of himself playing Gonzales’ music to win the opportunity, repeats his recital here with no little aplomb. The performance is enhanced by what Chilly calls ‘Pianovision’, a thin screen above the stage showing the entire 88 keys and nothing else, which allows me to recognise Joe’s skinny wrists as my own when I first took piano lessons (my teacher gave me lessons specifically to increase the muscles in my frail pre-pubescent fingers). It barely effects his control of the keys though, and one of his own compositions is also pretty impressive for one so young. Bravo Joe.

After a brief rap interlude of the Wall Street satirising ‘Decisions’ from Chilly’s orchestral rap album The Unspeakable Chilly Gonzales (sample lyric: “Some head’s gotta roll / They’re gonna try and squeeze you out through a loophole”), we’re introduced to celebrated classical pianist James Rhodes, who regales us with some sweet Chopin. Chilly utilises his skills by getting Rhodes to play a piece by the German composer Christoph Willibald Gluck twice; first in the cloying style of the most saccharine concert pianist, then following the score as accurately as possible, without letting personal style corrupt the composition.

The idea is to raise questions of authorial intent and acceptable levels of interpretation, but to be honest I completely forget about all that during the second run due to being lost in the gently beautiful music. Which I guess is an answer in itself.

It’s a charge, of the kindest sort, that could be levelled at the masterclass as a whole. While the lecture-based sections are enjoyable, it’s largely due to Chilly’s raconteur wit and obvious love for the mechanics of rhythm and harmony. As a learning tool, and this is obviously entirely down to time restrictions, I doubt many people took much on board – the demonstrations started off too simply for anyone but the complete novice, and then suddenly jumped to quite complicated techniques without much time to analyse exactly what had happened.

The music, however, is sumptuous throughout. From his Satie-esque solo piano works to the disco-flavoured arpeggios of ‘Knight Moves’, the most educative experience probably comes from just watching Chilly’s hands on Pianovision as he plays (there’s a moment when he wobbles out some tremelos and his hands almost look like they’ve been animated by Ray Harryhausen). Another guest student, Maud, is brought on to demonstrate the ability of two musicians to play together even if they’ve never met (although Maud’s understandable nervousness inhibits the example slightly), before an encore featuring Chilly accompanied by some basic iPad beats during a rendition of ‘Never Stop’ – a gadget-based nod towards the song’s use by Apple in an advert that funded many of his recent endeavours.

Do I leave with a greater knowledge of music and appreciation of the piano? Not particularly, but I leave with an enhanced opinion of Chilly’s music, as I imagine I will every time I get to hear him play it. The little embellishments, improvisations and comedy flourishes really bring his already fantastic music to life, and if I’m honest I would’ve probably been even happier just watching him play for two hours straight (or even 26 hours, as he managed during his world record-breaking performance in 2009).

However, as something of a lapsed pianist myself (largely owing to years spent living in a room too tiny to fit my keyboard in), having the possibilities of the instrument dissected and demonstrated so entertainingly was something of an inspiration to tinkle the ivories more often. I think that constitutes a success.

As an aside, and my impression may have been influence by the presence of The Monitors’ Nice-born scribe Florian sitting beside me, he absolutely rips into the French on a number of occasions. It makes me wonder whether, when he performs in France, he takes the piss out of the English at every opportunity*. I’m guessing he does. If there’s one thing you can say about Chilly Gonzales, he always plays to his audience. And his audience always leaves happy.

*After we posted this article, Chilly responded with this on Twitter: “I don’t make fun of other countries very often. But French-bashing is eternal, effective and just so damn easy.” Can’t argue with that. 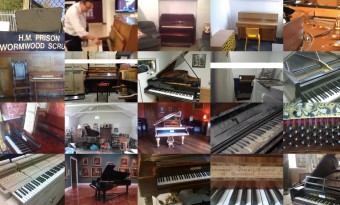 Restless musical philosopher Matthew Herbert showcases his latest project, involving a score of pianos from the Queen Mum's to the one at Wormwood Scrubs...
Read More