Personally, if I was lucky enough to have been given the name Brian Batz, I wouldn’t bother using a pseudonym. Unfortunately I’m not Brian Batz. Although a part of me wishes I was. For one, I’d be Danish, and the Danes are supposedly the happiest people in the world (although this is contradicted by Batz’s countrymen WhoMadeWho in one of my favourite music videos of all time). I’d also have a successful music career as Sleep Party People with three albums under my belt, of which Floating is the latest, and possibly the best. Yes, it must be nice being Brian Batz.

That would certainly explain why Floating, despite a certain darkness in places, sounds so… contented. It carries an air of satisfaction, like it’s been polished to perfection by master craftsmen. Which it has, having been recorded in San Francisco with Jeff Saltzman and Mikael Johnston, who between them have produced records by everyone from Jane’s Addiction to The Killers. Fortunately it sounds nothing like the latter.

Nor, to Batz, does it sound like Sleep Party People. “The whole feel of the album is very different from the two earlier releases,” he insists in the press release. “It’s 100% hand-played and totally organic and analog. I wanted it to sound more like a band than a one-man-project this time.” He also limited himself to 24 tracks on each song, although it certainly doesn’t sound any less layered for that.

In fact, to my ears it still sounds pretty much like a Sleep Party People album (no bad thing), but the attempt at a more live sound is apparent early on, with opener ‘Change in Time’ all shimmering guitars, chugging drums, and what sounds like about a thousand effects pedals. ‘Floating Blood of Mine’ feels similarly band-like, projecting the summery feel of Childhood. Albeit with an added sample of someone dying after smashing their head on a fireplace, just to keep things from getting too happy-clappy.

‘A Stranger Among Us’ goes for a similar cheery/creepy juxtaposition, with beams of bright keyboard smashing against lyrics like: “you’re a stranger among us / And you can no longer touch us”, before breaking into a bouncy double-time beat towards the end. The combination of primary colour sounds with adult undertones makes it all feel a bit cartoon-like, in the best Adventure Time or Rick & Morty sense.

‘In Another World’ is more upfront about its darker side, and is my favourite track on the album. A skeletal minor-key motif shifts between semi-tones, while a descending scale prowls like Nosferatu into a maiden’s bedchamber. And yet it still manages to sound kind of pretty. Although mainly it just sounds fucking great.

From horror to sci-fi, as the instrumental ‘Death is the Future’ adopts a gurgling, off-key pose and marries it to some classic John Carpenter-esque sounds. The maudlin melodies trudge past like enslaved aliens bound in chains, while the beat sounds like it’s been sent through space to kill you. It may not actually be on a soundtrack (yet), but if it was, it would be for my kind of movie.

Those three tracks form the tastiest meat in the Floating sandwich, as while there’s still plenty of goodness in the bread on either side, it does feel a little plain in comparison. A piano-centric instrumental (brilliantly titled ‘I See the Sun, Harold’) fizzes into a pleasantly distorted conclusion, while vocals from Lisa Light enliven the otherwise over-long krautrock stroll of ‘I See The Moon’. ‘Only A Shadow’, meanwhile, sounds like what might occur if Elton John started writing ballads for Connan Mockasin, which isn’t a wholly bad nor wholly good thing, while ‘Scattered Glass’ has some lovely Jón Þór Birgisson-style vocals but is similarly slow-paced.

While Floating is a fantastic album in parts, it feels like the record is maybe missing one big banger to round things off. As it is, it simply floats away. Which I guess makes perfect sense really. Still, like a balloon in the sticky grasp of a five-year-old, it’s most enjoyable while it’s still there. 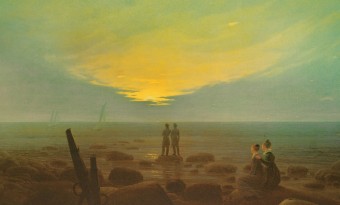