For anyone who’s been banging on about gentrification in London recently, On Blackheath must’ve seemed like the epitome of yuppies having a fun day trip (pretty certain I spotted a couple of VICE writers in the press accreditation line, so expect a cynical review over there shortly…). Having said that, Blackheath (an area I’ve never been to during the day before) looks like it’s been upmarket for quite a while, so a John Lewis sponsored event wasn’t entirely out of place.

The ticket fee (£57) definitely creamed the sort of people who could afford to attend; students are more likely to double the expense and head to Bestival, Field Day or Lovebox and get way more bang for their buck. Saying that, the main problem with the ticket was the total pisstake that is See Tickets adding a £5 booking fee. I mean seriously, music industry: PLEASE STOP USING THESE MIDDLE MEN.

Inside, apart from the fact that my mate and I were two of the only people without kids, it was much like any one -dayer. The beers were still a fiver, but at least it was a pint of Meantime instead of a can of piss-poor lager. The recurring theme of car showrooms at a festival continued, this time it was a couple of German Whips, following on from Peugeot at Beacons and Mini at Primavera. The ‘Neff Food Stage’ was probably the strangest addition to proceedings, but then again I’m (probably) a couple of decades away from considering buying an oven so maybe/likely I’m just not the target market.

Onto the music, and it was nice to go to an outdoor event in London where the main stage was actually turned up volume-wise for once – a gig at Hyde Park is like somebody whispering a show through a microphone at a school disco. First on the bill were Edinburgh’s Young Fathers, the spiky-limbed three-piece backed by a live drummer and a backing singer for every other track. Their debut album DEAD is one of the albums of the year so far, and live the physicality of their gospel-infused, electronica-smothered hip-hop lost none of its force, even at a 4pm slot. The three members broke into breakdancing or cock fight-styled posturing throughout, while the distorted, tribal rhythms continued to punish the champagne & cocktail audience. 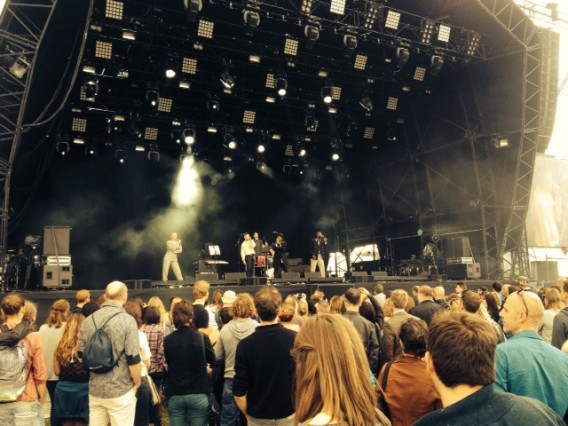 Following was the affable Aloe Blacc, and while both him and his band were technically good and his audience participation suited the crowd, it was all a bit happy-clappy for me. Although it wasn’t offensive to good taste in the same way his closest modern comparison, Pharrell, is, it was like hanging out with someone who’s constantly got a smile on their face and calls everything ‘good’. I kept wishing I was watching Charles Bradley if I’m honest, but by this time the event was packing out nicely and everyone did the clap along thing.

Midway through this set we wandered into the Village tent only to witness Jarvis Cocker DJing reggae. Or not, as a guy next to him seemed to be doing most of the work while Cocker played around with some lights (“He’ll never mix like modern people” was the response via text from my mate from Sheffield, bang-on Dad joke that).

Gilles Peterson’s Brownswood label took over Stage 2 with their collection of jazz-inspired dance artists, though I got the feeling most people in the audience didn’t have much of a clue what they were watching, so the atmosphere never really developed to help elevate the sets beyond feeling like showcases. Swindle’s live set contained enough guilt-free upbeat electro stuff to want to see him in a friendlier environment, and BADBADNOTGOOD’s set seemed great, although we only caught the mid-section.

One of the big draws of the day was Grace Jones, who I’ve got to admit I don’t have too much of a in-depth knowledge of. While the show started a little slow – a couple of reggae numbers that just seemed a little dull – it soon picked up the pace and energy. She certainly puts on a show, with a costume/headdress change after every song, at one point even hula-hooping her way through a track. By the time ‘Pull Up To The Bumper’ comes on the crowd are lapping it up. While it’s impressive that at the age of 66 she still looks thirty, the between song banter could’ve done without the self-regarding comments about her body, the “I hate my legs… but everyone else loves them” one, while looking impressive in a black leotard, was probably the most grating.

Fun story about Massive Attack: apparently my Dad used to serve pizzas to Mushroom in Pizza Express on Bristol’s Park Street, for which he’d pay by cheque with ‘Mushroom’ actually being his official title on the account. Whether or not it’s true, that family story and the sheer dearth of legitimate cultural heroes from Somerset means that MA are about as close as I get to a big local act who make me vaguely proud of being from farmer country. Although they’re technically from Avon. We share a police force? No, think I’m pushing this a bit far.

Nevertheless, all the hype around their live shows was more than delivered upon, taking tunes from across their catalogue to build a perfectly formed set, with Martina Topley-Bird and Deborah Miller’s five star vocal efforts bringing the songs to life. While on paper their now famous backing projections shaming brand logos and reprinting official reports from military operations might seem a bit awkwardly hypocritical at such a heavily sponsored event, it did feel a lot more like everyone was having to play to Massive Attack’s terms (confirmed slightly by the fact that they had to give the OK to every other artist playing throughout the whole day on every stage).

To be fair, much of the audience didn’t seem like they were going to partake in much establishment-bashing in between changing nappies and paying the insurance on their five-door the next morning, but MA’s shtick seems totally honest. At no point do you feel like you’re watching The Guardian: The Musical, and that’s a thin line the band manage to tread near but never over. It’s more like watching a breathing art piece, the timeless sentiments still ringing true. You could stick the music and the visuals in any gallery in the UK, from the Baltic to the Tate Modern, and it’d be as effective and emotional as any of the Turner Prize nominees.

And if that sounds all a bit too la-di-da, the tracks still have the hip-hop indebted, free party friendly rhythms that can keep any festival crowd pulsating. By the end of the night I’d totally forgotten about the booking fees, long queues and pricey food, and was totally entrenched in Massive Attack’s world; dark, haunting, electronic, beautiful. 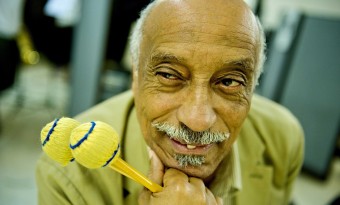 From Duke Ellington and Jim Jarmusch to Kanye West and Madlib, most everyone who's heard Mulatu Astatke's music has fallen under its spell - and now a host of Londoners are set to do the same when he plays the Royal Festival Hall...
Read More