You wouldn’t finger Noel Fielding as an obvious influence on Bill Callahan, but it would appear the artist formerly known as Smog has been eagerly re-watching all his old Mighty Boosh DVDs, judging by this new video for ‘Javelin Unlanding’. It sees him take on a version of Fielding’s old role as the moon, although Callahan’s incarnation is, obviously, more deadpan poet than rambling imbecile. Would Fielding’s Moon have come out with lines like, “You looked like worldwide Armageddon while you slept / You looked so peaceful, you scared me”? Well, probably, but it wouldn’t have sounded so beautiful.

It’s about as cute and cheerful as you could imagine a Callahan video ever getting, which is to say that despite the fluffy clouds, dancing plants and shooting stars, Earth does still end up getting annihilated. Yet the primary school animation style is downright charming, and Callahan’s largely static disposition allows him to convey a surprising amount with the subtlest of movements (much like when he plays live).

Why this video has taken so long to emerge when the album it originates from came out almost a year ago is anybody’s guess, but any excuse to savour this delicious record yet again is welcome. Next up, Will Oldham does his best Father Ted impression in a brand new video for ‘Death to Everyone’…

Bill Callahan plays the following dates in Europe over the next month: 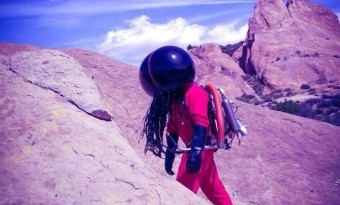 Busdriver's visual imagery is almost as resistant to interpretation as his brilliantly opaque lyrics. Which just makes his new video all the more enjoyable...
Read More