There’s a track on the cerebral, silver-tongued Busdriver’s Fear of a Black Tangent album (the rapper’s best in this critic’s humble opinion) called ‘Unemployed Black Astronaut’, in which he self-deprecatingly dissects his outsider rap status with lines like, “I’ve been out-sold and my styles are old and lame / I’ll spark a lighter to the carpet fibre ’cause I’m not a household name”. Yet while his flow may be akin to a volume of modernist poetry being shot from a Gatling gun, this new single demonstrates his style is still far from being either old or lame.

His status, however, remains firmly cult. Indeed, having already declared himself “the first black astronaut to walk the bare moon”, ‘Colonize the Moon”s title suggests he’s happy to remain in the musical biosphere he’s created, separate from the mainstream. Whether that’s actually the case or not is, however, hard to judge; for while Busdriver’s lyrics (like his tweets) are always enjoyable for their vivid imagery and flighty fits, they are often close to impossible to decipher. Here he seems to be correcting impressions he may have given on previous tracks, although whether that matters when he’s delivering couplets like, “First, I think all your primitive poises are a pantomime’s slow wank / That’s why I greet ’em all with “‘atta boy”, just a data point in the phone bank”, is a moot point.

Still, the accompanying Mattia Fiumani-directed video is much easier to digest, if still enjoyably bizarre. Making the most of the chorus’s astral theme, it sees Busdriver sporting a retro-futuristic spacesuit while traversing rocky ‘moon peaks’, his helmet a gigantic dipterous globe sprouting streams of tape like plastic dreadlocks. Later we see tape spools spewing from his own mouth which, considering the rapid frequency at which lyrics are fired out of it, seems a fitting visual metaphor. 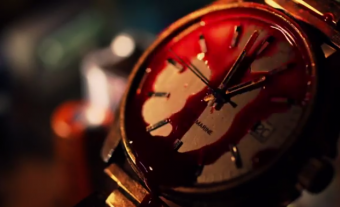