There are many things that it’s useful for your band-mates to possess. Their own instruments, obviously. Excellent administrative skills come in useful. Teetotalism is useful when sharing out a stingy promoter’s meagre drinks allowance. And if you know someone who owns a working van then you should probably let them join regardless of musicianship (or lack thereof).

The ability to make music videos is perhaps less obvious but still very useful, as evidenced by this clip from tuneful Breakfast clubbers Teleman. Created by the band’s keyboardist Jonny Sanders, it’s as colourful and quirky as their music. Similarly, it’s a lot more enjoyable than you’d expect for something that can have the word ‘quirky’ readily applied to it.

Rotating fruit and nice shirts are the two most common repeating motifs, but it’s the brilliant editing and animated elements that really make it work. The odd surreal moment (masked dancers, men with hands for heads) also helps it transcend simply looking slick and takes things into more interesting territory. The colour is fantastic throughout too, featuring a selection of shades that work perfectly together, emphasised by the fact the band’s members all appear in black and white.

The song doesn’t hurt either, a radio-friendly number rotating around a jauntily descending guitar riff – it’s sugar-coated indie-pop after being given a once over by Mr. Sheen. It’s also a reminder that, no matter how many useful attributes your band possesses, none of them will ever surpass the ability to write a catchy tune… 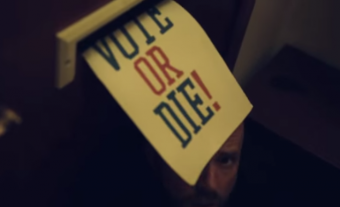 So just how should we combat voter apathy? As Scotland's referendum on independence approaches, Dunfermline's Foreignfox offer a compelling 'threaten them with baseball bats' proposal...
Read More