Although continuing to be something of a Sheffield secret, with its consistent and diverse line ups, countless opportunities to discover some local gems, and promise of a city-wide party, Tramlines is quietly becoming some peoples’ favourite inner-city event.

I missed last year’s Tramlines due to my left leg refusing to bend at the knee, but this year I’ve kept far away from any ligament trouble in preparation. Last time I visited Sheffield was for Wet Nuns’ (RIP) Detestival two-dayer at the Queens Social Club. This time around I’m expecting a few more beats, a little bit of pop, and hopefully a sprinkling of sunshine.

The weekend is split between the £12 day ticket venues and a ‘Fringe’ event which is free for everyone, so below are a few selections from both sides of the fence.

The working week ends with a bit of a party theme, Sheffield born Toddla T will be heading up the Devonshire Green (20:00) for some bassy lovliness. The swooning East India Youth (The Harley, 21:30) will delivery his heart felt techno while Tiga (02:15) will bounce the night away at the 02 Academy.

First thing on Saturday is Her Name Is Calla (City Hall, 12:30) – the productive soundtrack folk group is fronted by TV and film composer Tom Morris. They have 29 releases listed on their Bandcamp at the moment, so there’s plenty to dig into beforehand.

Mega hyped three-piece pop girl gang JUCE will be taking to the Devonshire Green stage (14:00) delivering their almost unbearably catchy brand of synth-pop, for people who like TLC and Salt N Pepa (not ironically). If you like your electronica a little more “WTF” then Nordic Giants (City Hall,16:10) might be up your street. The masked post-rock duo create a sound similar to a Goth Public Service Broadcasting.

At Crystal, Stoke’s Moscow will be making an appearance. They’ve been quietly garnering a bit of a core fanbase since the start of the year, and sound like they’ll be a good band for people who miss The Chapman Family (like me). Following them at 21:00 will be the downbeat but melodic The Darlingtons, who we’ve covered here on The Monitors before.

Straight after that at 22:00 you have to choose between the jaunty, anger-filled Future Of The Left (City Hall) or the techinoclour vibes of Galaxians. Considering that from thereon in the night is looking to consist of Prince Fatty (Yellow Arch, 23:00), Aunti Flo (Queens Social Club, 00:00), The Gaslamp Killer (Octagon, 01:00) and LONE (Octagon, 02:00), we know who we’ll be picking to get us in the party spirit…

It’s not only a music festival, of course. You’ve got the poetry and MC showcases at the Global Peace Stage, and some pretty funky looking jazz at Leopold Square.

This being Sunday, the only thing you’ll be wanting is some fuzzy garage rock of course. Locals Best Friends (Queens Social Club, 16:30) and Fruit Tones (The Great Gatsby, 17:00) will be perfectly suited to deliver this [plus they’re guaranteed to look good too – Ed].

Causing more hangover problems is likely to be math rock experimentalists Three Trapped Tigers, at Corporation (18:00). The gliding keys of Blossomer (The Leadmill, 19:15) might be able to help smooth out the pain from all that noise, before the Leeds and Sheffield-built Hey Sholay take to the same venue for their euphoric sing-a-long indie. And that leaves us a night to have our ear holes ripped apart once again by Bo Ningen (Queens Social Club, 21:00) and The Black Tambourines (Great Gastby, 23:00).

We’ll be reporting on what we actually managed to see/hear sometime next week. In the mean time, if you’ve got any other tips for what to catch over the weekend give us a nudge at @themonitorscom. 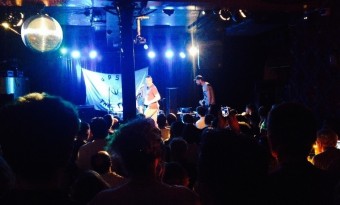