Last year we played with a load of bands at an all-dayer in Manchester and one of them was called Fruit Tones. They were super good, and as Fruit Tones can provide 5-a-day up in your ears so you don’t have to eat greens (I’m hilarious) I asked them some questions…

Boring I know, but how did you guys meet?

Playing in other bands is the short answer. Basically me and Nova had known each other for quite a while but never played in a band together, and then my old band Peace Signs played a few shows with The Bell Peppers which is Dom’s other band. Then there came a time when me and Nova weren’t playing in any bands so we started a band. But then we wanted a bass player so we could really get groovy, and I thought Dom was the man to call. And then we were a band called Fruit Tones.

Manchester has got some really good bands doing cool stuff at the moment, I’ve loved Brown Brogues long time and Pins and Temple Songs are getting around. Am I right in thinking you share band members quite a lot in Manchester? How does that work with writing and playing shows? Does it get awkward if you give another band a good song or sack off a show to play another? Do you consider yourselves a super group?

It’s true that a lot of people play in more than one band here. Our Dominic is a Bell Pepper and a Fruit Tone, but we have different set-ups so when he makes up a song it’s easy to tell which are fruit-suited and which are peppers. Fruit Tones is the only band I write for but I sometimes fool around on guitar with my friends Drei Dogs. With shows it can get crazy though, there have been a lot of scenarios with somebody playing 2 or 3 sets in one night.

I think because everybody knows each other it turns into some kind of computer game, where people think up good line-ups with people from around the city and usually those bands end up forming at some point. There are so many good musicians writing music that there are plenty of songs to go around, and bands can form and sound good without needing too much practice.

Recently I nearly ran over the Rev of Reverend and The Makers who didn’t wait for the green man here in Sheffield. Whats your best story featuring you and a Manchester ‘personality’?

Ha, I’ve not met many of the classic Manchester personalities so I haven’t got much. Saw Craig Charles kicking a door recently because he was too drunk to open it properly. Also the guy from The Courteeners told me he liked my jacket one time in a nightclub toilet. Think that was the last time I ever wore that jacket.

What are your thoughts on music in Manchester right now? It appears from the outside like a lot of people are working together or have close links. Is there a kind of place or have there been events that have been important for that? I always forget just how vast Manchester is until getting there. Does it affect things?

Manchester is the centre of the pop universe! It is big, but it’s small enough that you will tend to run into the same people, which develops this kind of community feel that you maybe wouldn’t get somewhere like London. Good things have been going on for a long time but everything probably peaked last summer, there were so many bands that were really active, you could go to a gig almost every night.

For me there isn’t really one place that everything is focussed around, I think it’s more to do with people – people in bands making it happen for themselves and people who dig these bands trying to help them out. Independent promoters/labels like Comfortable on a Tightrope have been doing awesome stuff for a long time which probably inspired a lot of people to either start a band, or maybe showed them that they could put on their own gigs and release their own records and completely cut out the middle man and the money-making incentive that can spoil music.

To say how big Manchester is, there’s not really much to do here. Especially if you don’t have much money, which I think is why people can manage being in a few different bands and how they get good at playing – it’s really fun and there’s not much else to do.

It seems that people are only just coming around to understanding that there are bands in Sheffield that don’t sound like the Arctic Monkeys. I imagine people sometimes don’t understand you can be in a Manchester band and not sound like Oasis, The Stone Roses or any of the other big Manchester bands. Do you feel some bands don’t get the attention they deserve due to Manchester’s rich musical heritage?

There has been a lot of that here. For example there was a piece in the NME a few weeks ago that covered a lot of different stuff that’s gone on in Manchester, and it was a very well researched article on really current, relevant stuff, but I saw it getting attacked by a few old Manchester heads who have obviously never heard any of these bands and probably hadn’t even read the article.

But then again there have been times recently when bands play in the small pubs and old guys who have been regulars there for years have just happened to catch the show by chance and said they really enjoyed it. I think that old Manchester idea is on the way out, and people seem to be latching onto the fact that there’s a lot of new bands here – everyone seems to be getting a lot more coverage than they were a couple of years ago. Really cool to see Temple Songs putting so many singles out and playing all over the UK. Stone Roses better get out the way!

How old were you when you discovered you could grow a great moustache?

Haha! Around 20 I think. A few years ago me and my girlfriend went to Sri Lanka and the flight is something like 12 hours each way – I spent it watching back to back western films and wild west documentaries and that got me in the right mind-set at a young age.

What are your release plans? I want to hear more of the songs you play live recorded.

We’ve got a new tape out on Fuzzkill Records that’s a split with Deathcats from Glasgow. It’s called Thplit Tape. Our side is some pretty rough songs we recorded ourselves in our practice room. Just demos really but we thought we may as well let people hear them.

If all goes to plan we’ll be doing some better quality (hopefully!) recordings in March for an EP that will be mostly those heavier new songs we play live. Hoping someone will want to put it out on 7”.

Who else do you think is doing good stuff in the UK right now?

Right now it feels really good because my favourite bands are all my friend’s bands, I feel really lucky getting to watch them play live so often. In terms of groups from outside of Manchester we’ve played with we luuurve, you guys and The Black Tambourines. Really into Girl Sweat’s Heel Suckers tape, he’s playing a couple of shows with us on our mini-tour so can’t wait for that. We’ve played with The Yawns from Glasgow a few times and they’re really good. Everyone should buy our new tape just to listen to Deathcats who are awesome too.

Locally I love playing shows with The Hipshakes – they take no prisoners, and also Dan Hipshake played drums for me and and helped get one of my first bands off the ground. Former Bullies and Dinner Party are two of my favourite bands of all time, anything Nick Ainsworth touches is absolute gold! Temple Songs, Mistoa Poltsa and Sex Hands are all incredible, I heard that Sex Hands have just finished a new album, really can’t wait to get one. Our Dom’s Bell Peppers are rockin’ of course, also watch out for The Boogly’s and Drei Dogs – the newest additions to Manchester’s rock n roll hall of fame.

You can catch Fruit Tones at the following shows: 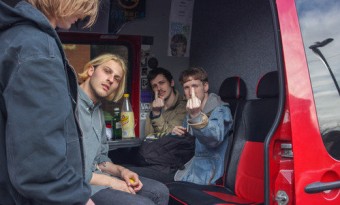 Nai Harvest and Playlounge detail the vomit, crying children and matching tattoos that ensued on their recent release tour. Not to mention the 'Pokémon penis trick'...
Read More