It’s in tribute to their hard working ethos that Sleaford Mods have experienced a pretty exceptional rise to glory over the last few months. After years of small gigs in their home city of Nottingham, the Lexington was the first of four headline shows in the capital (all likely to be sold out), continuing with two dates at the 100 Club in October and then the Electric Ballroom in January next year. They might be angry, pessimistic and inspired by punk but they’re not looking to settle for mere flash-in-the-pan cult status.

The Lowest Form opened up with noise, lots of noise, and shouting. In fairness I’m not a natural participant in the scene but from an outsider’s point of view there’s not much to engage with, the amalgamation of metal, hardcore and emo elements being three tags I’d really struggle with in isolation anyway.

The main attraction bounced onto the stage exactly at 10pm, to an audience suffocating in the heat of an upstairs venue on the hottest day of the year. Frontman and founder Jason Williamson constantly does that head bob thing Paul Weller does when he goes into a solo, hand constantly twitching towards his nose or his back as if he needs something to keep him occupied. The spitfire velocity of the lyrics comes with a precision that demonstrates a professionalism to the performance, even if the set-up is pretty bare.

Beat-maker Andrew Fearn doesn’t have a lot to do, probably by choice, and fair enough not pretending to do anything other than press play when your job’s already been done by making the songs in the first place. He instead takes his time necking cans of beer and putting his finger in the air when Williamson delivers a particularly vitriolic line (“Why do yesterday’s heroes think they’re today’s heroes? / This ain’t a pyramid / You’re not a fucking Pharaoh”; and my personal favourite: “We want to have a good time, we wanna get loaded / In St. John’s wood”).

The minimalism of the grimy sample sounds and the pub politics being laid out by a sort of anti-performers’ performance ties in with their ‘man on the street’ image, and also means they’re not open to the sort of impromptu moments of either balls-up or genius that many of their direct influences would’ve thrived off (The Fall, The Jam, the Specials).

They go down a storm as well, slagging off New Labour, talking about jobseekers, complaining about a guy with too much money – but this isn’t Generation Y anger, and the audience sort of proves it. In between the veteran NME journos and alternative comics from the ’90s, the average age of the audience is: married with kids and a mortgage tied up in Walthamstow and/or Camberwell. Sleaford Mods are a band who deliver an angry review of the past twenty years to a generation (or two) who probably feel like they were lied to. Romanticism and new ideas this is not, but while they might not be the future, they provide a far more entertaining, poetic and honest depiction of the recent past and present than most acts can muster. 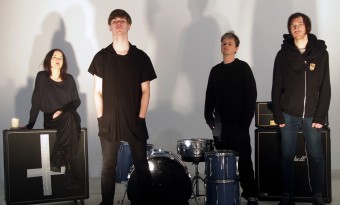 It may be Cold in Berlin, but it was bloody boiling in the Power Lunches basement when the goth-tinted four-piece headlined ‘It’s Dark and We’re Wearin’ Sunglasses’...
Read More