Does anyone remember The Jetsons, Hanna-Barbera’s ‘60s futuristic utopian cartoon, all flying cars and other cosmic delights? I always imagined that there must have been a dark, seedy part of that world which was kept offscreen during the cartoon, a futuristic red light district with floating dive bars and drunks in tattered space suits. I can now imagine that Cursor Major would have been the house band, or at least on heavy rotation on the jukebox, in this Jetsons-style underworld.

It was last Thursday night when I went to catch the band’s launch show for their Interloper EP at The Golden Lion on Bristol’s Gloucester Road (Londoners, think of the Kingsland Road but cheaper and no beefy Essex lads). Turning up a little on the late side, I managed to catch the end of The Blunderbuss Press’ set, the solo project of Stuart McTidy, an acoustic singer/songwriter with a penchant for brilliant song titles such as ‘Nudists With Really Big Heads’ and accurately self described as having a “broken glass voice”. The Blunderbuss Press is a semi-comedic storytelling vehicle and this had set the positive mood for the building crowd. Wishing I’d caught more of the set, I had to make do with this podcast to catch up on what I had missed.

Main support for Cursor Major came from North London group The Walk Uprights. They reeled out some classic trad-pop tropes and were undeniably tight, but it feels as though they’re a band that have yet to live up to their potential. I don’t know if it just wasn’t quite my cup of tea, or if there’s something missing. Nevertheless, they kept spirits high, feet tapping, heads nodding and while the tunes they played had some classic familiarity about them, with the hammond organ and tried and true Stones-esque chord and song structures, there was also some genre-bending originality about them, a distinct lack of imitation. Denis Osborne’s vocals rang clear as a bell, Dee McGrudy’s hammond gave the sound a retro edge and the band’s rhythm section (Richard Easeman – bass, Ed Phillips – drums) kept it tight. All in all, it’ll be interesting to see where they go next.

Cursor Major provided a real masterclass in showmanship. If the devil is in the details, each member of the band must be a master of the dark arts. From their appearance (dressed to the nines, most notably featuring ties and velvet smoking jackets), to the sample triggering, and of course the absolute abundance of hooks in every track, nothing is overlooked either in the studio or the live show. The band opened with two of their singles, ‘Give Up The Ghost’ and ‘Floating Around’, with frontman Andy Norton (Phil Lynott doppelganger, formerly of The Crimea) leading the charge, Ben Johnson decorating each track with guitar hooks that remain lodged in the ears for days afterwards, and Scott Nielson and Charlie Inshaw providing a rhythm section so tight that it was almost as if they were in some kind of Vulcan mind meld with each other.

From the lighting, to the samples of synth hooks and extra layers of futuristic bass backing up Nielson, and every other little detail, while Cursor Major were onstage it really felt like being in the aforementioned Jetsons underworld dive bar. That they had that kind of effect really goes some way to separate them from simplistic descriptions like ‘indie pop’. To give them a casual listen, it’s essentially solid pop songwriting, but it’s afterwards that you start realising that the hooks come from all directions, when you have the stabby rhythm section from the chorus of ‘Red Light Fever’ stuck in your head, the fuzzy bassline from ‘Floating Around’, the guitar part from ‘Positively Negative’, the backing vocal from ‘Give Up The Ghost’. To reiterate, the devil is in the details.

These are songs you can listen to several times over and hear new little hooks every time around. Those details were all present during the live set, and it really seemed to transform the surroundings of the Golden Lion into something a little bit out of this world.

Bad Vibrations invite us into This Prismatic Room... 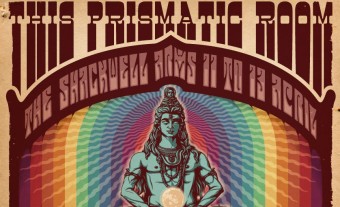 We're delighted to have our favourite London promoters, Bad Vibrations, as guest editors this week - as they prepare for another of their legendary psychedelic weekenders...
Read More