This week we’ve invited our favourite London promoters Bad Vibrations (who we have waxed lyrical about in the past) to guest edit The-Monitors, so they can share some of the heady musical delights they’ve gained a reputation for uncovering. In their first post, they give us a run through the bill of their latest psychedelic weekender, This Prismatic Room…

Whilst the weather brightens and the days become longer, excuses for spending your weekends holed up in your favourite venue or drinking establishment are lessening. If, however, the fast approaching festival season and its congregation of vest-wearers and face painters don’t entice you to amass once verdant settings with the rest of the herd, then, nestled amongst a busy Shacklewell Arms spring schedule, is Bad Vibrations’ This Prismatic Room.

No strangers to emerging from a full day and night of live music, bleary-eyed, ears ringing and beer-stained, This Prismatic Room marks Bad Vibrations’ second weekend-long music festival in only a few months, with the impending being bigger and more ambitious than the previous, albeit successful, The Reverb Conspiracy.

With talent pulled in from around the world, the Dalston gig hub will play host to the likes of Germany’s The Blue Angel Lounge, set to make an ultra rare UK appearance coinciding with their much anticipated third LP release only a couple of weeks post-festival. You can count the number of times their trancelike omissions of guitar and shadowy tones have graced these shores on one hand, making the final day of the festival all the more enticing. There’s plenty more to witness before the course of the trip reaches its crescendo, however.

Commencing on the 11th April, Friday’s timetabled array of artists span a number of continents, no doubt ensuing that a diverse collection of transmuting tunes will sound out from beneath the arches of the Shacklewell stage. Early on the bill and before skimming the seas of the Atlantic Ocean, homegrown talent Blonde Bunny’s groove-ridden set will no doubt more than meet the challenge of getting things moving. Few groups’ musical gambit would be to throw out a seven-and-a-half minute track whilst trying to gather momentum, but in ‘How Do You Cope, Hope?’ Blonde Bunny did, all the while retaining an excitable buzz on the circuit.

In another transatlantic showcase, Saturday aims to pick up where Friday left off. Around the time your senses have realigned and your hair of the dog is just about alleviating the previous night’s wear and tear, a couple of homegrown groups will take to the stage in succession. The swirling atmospherics of Parlour will prove the perfect remedy, before Manchester’s Psych-scene familiars The Underground Youth, no strangers to The Shacklewell Arms, continue the movement of hypnotizing, spaced-out rock.

Pushing into Europe means Radar Men From The Moon and The Wands will feature soon after. The latter, favourites at Liverpool’s International Festival of Psychedelia, always seem intent on delivering a ferocious blend of snarling vocal work and enchanting guitar parts – much of the same being expected at This Prismatic Room.

Finishing in a much similar ilk, Bay Area quintet Lumerians headline the penultimate day of proceedings. Rhythm-heavy instrumental sections are the perfect backdrop for their drifting guitar and absorbing vocal – something which should be accentuated in The Shacklewell Arms on a busy Saturday night.

If the aforementioned Blue Angel Lounge isn’t enough to whet the appetite (appetite being dependant on the previous day’s over-consumption), special guests will also characterise the final day. Other promises of this kind have typified Bad Vibrations shows in the past, so it’s no doubt something worth keeping eyes peeled for. A couple of one-man musical projections in Grimm Grimm, of Japan, and Spectral Park complete the bill for Sunday and for the weekend – topping up hours upon hours of live music in the east London setting.

Now under a month away, The Prismatic Room aims to highlight a growing scene of musicians, both homespun and from much further afield, where an international audience is expected to follow. Opportunities to catch artists in this manner, where selection is so widespread, is rarely so straightforward and accessible; so now’s the time to grab a ticket if you haven’t already done so.

Before I Start To Cry... Vivian Girls say goodbye to L.A. 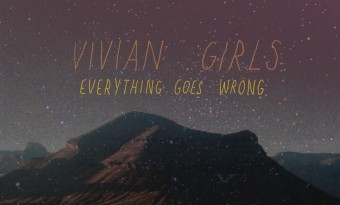 Vivian Girls bowed out last month after seven years of ladling out gloriously lovelorn garage joy. So was it a fond farewell? Well, not exactly...
Read More