Islands are a great band. I’m not going to argue with you if you disagree, O.K? I’m just not.

On their first 3 albums they made fucking cracking dreamy indie-pop, which some people might call ‘quirky’- as if that’s a virtue.

Those ‘people’ are wrong. And I am right.

Some of them may even be standing with me in Birthdays, Dalston, waiting for the band to take the stage. They get everywhere don’t they – ‘people’. Like spilled Christmas glitter.

Islands lead man Nick Thorburn was once the singer/guitarist of equally smashing Canadian band The Unicorns. You may remember their (indie) club hit ‘I Was Born a Unicorn’, all jangle and drums. Well they split up didn’t they, and Thorburn went on to form Islands.

Like the Unicorns, Islands feature upbeat rhythms and hooky melodies, hiding a dark lyrical predilection for death and decay. Imagine the skeleton characters from the Funny Bones books going to the Caribbean and getting arseholed. All good stuff, but not quite Alan Bennett.

Well something happened didn’t it. It often does.

Thorburn split from his wife and the incoming emotional tsunami devastated his pleasant little Island home. Skeletons and all.

The result was Islands’ 4th album ‘A Sleep and a Forgetting’, a brilliant fucking album. Honest, open and devastatingly heartbreaking, it was by far my album of 2012 (so by extension everyone else’s too). “It feels a crime to be crying for this long,” sings Thorburn on ‘This is Not a Song’, and the pain seeps out of the speakers and onto the carpet, leaving a damp, chunky residue for you to clean up later at your own leisure.

It’s absolutely wonderfully upsetting. Being the miserable bastard I am, it totally matches my bleak, raincoat-addled mood perfectly. I’m in love.

I first saw Islands live in 2012 around the release of that album, and it seemed like Thorburn was about to burst into tears with every twisted wriggle, each song forcing its way through his lips and his hips. Crumbling yet defiant. A devastatingly sexy combo.

I wonder how much of this material will be played tonight, Islands having recently released the violently fabulous ‘Ski Mask’. The eventual answer will be not much. 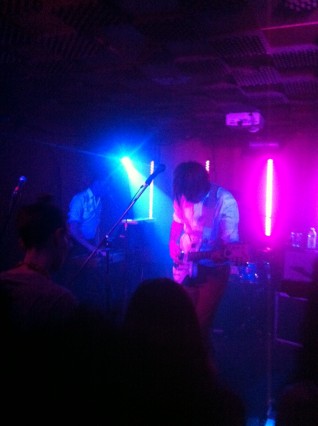 The band enters the stage through thick smoke and pink ’80s lighting. There’s already a swagger, which suggests a new tone for the evening. Not like an Oasis swagger, let’s be clear – they’re not cunts.

“When it was dark, I was a question mark / Becoming the gunship”. If ‘A Sleep and a Forgetting’ was sad, the opening lyrics to ‘Becoming the Gunship’ from Ski Mask are downright defiant and the band power through it without a hint of waterworks. A ‘fuck you’ guitar line anchors it with a spiteful vengeance. The tears have been replaced with clenched teeth, stiff upper lips and tight fists.

Ski Mask is played in near full, with the sassy bassline of ‘Wave Forms’ sending the audience into a mild pogo frenzy. Mild, it is Dalston after all.

The brilliant ‘Death Drive’ sounds like the incidental music from an imagined Saturday afternoon crime drama. P.I.: “The body was just here, someone must’ve taken it…”. Angela Landsbury (AKA Paul McCartney) would explode with joy.

‘Nil’ is a wonderfully bizarre cabaret song (but not shit) ,filled with oom-pa-pa piano charmingly set to lyrics about some very dark substance abuse: “When I’m drowning I like drowning alone / Don’t need no one to tell me to pull up the rope / I can’t have only one / No I can’t just have only one / It’s all of none”. It’s this constant mix of chirpy music and distraught lyricism that makes Islands so interesting.

The highlight of the set is the combo of ‘Sad Middle’ and ‘Hushed tones’ from Ski Mask. These prove that though Thorburn is putting a brave face on, underneath the (ski) mask, sadness still lingers.

Lyrics are forced out with a subtle anger during ‘Sad Middle’, aided by an incessant Wild West drum line that Sergio Leone would be proud of. ‘Hushed Tones’ is like a cuddle after a huge fight. Faces pressed together, still wet from the salty streams. A smile beginning to re-emerge as the threat of yet another clash still hovers in the previously blue air.

Songs from the first 3 albums are welcomed in like old friends. ‘Swans’ from their debut Return to the Sea is an epic wave of a song. Vocals and keyboards come forward and withdraw, eroding away the beached rocks of the dance floor, revealing remnants of old bones. Building, always building, to its huge Viking ship guitar ending.

‘Creeper’ from Arms Way does the opposite of its title and rushes out, melting the small girls in the front row. It has a disco guitar line that Franz Ferdinand would gladly enter into a bout of fisticuffs over.

‘Switched on’ from Vapours echoes the evening’s mood: “Switch on a sad song when I’m gone”. Tonight is for dancing and reminiscing about the sad times but not dwelling, not now. We can do that afterwards. I know I will.

They play a new song, which is a belter, and points the way towards a brighter personal future for Thorburn. It’s a powerful funk. I can’t now remember anything about the lyrics but I’m sure they were good.

They close with the one and only song they play from A Sleep and a Forgetting – ‘Can’t Feel My Face’. My lord it’s a fucking demon. It’s a propulsive, ’60s organ led, glam banger. It’s dancey as fuck. But those lyrics… “I miss my wife, I miss my best friend every night”… and I’m dancing with tears in my eyes indeed. Thanks Midge.

This confession after the upward confident bluster of earlier is flooring, and I lay amongst the bones scattered on the ground with the rest of Dalston. The skeletons are back. Hooray.

Well, the skeletons may be coming back out of the closet but at least they are now wearing snazzy Hawaiian shirts. I think we can be good friends and dance into the night.

The Wytches @ The Exchange (with The Epicdemics & Nasty Little Lonely) 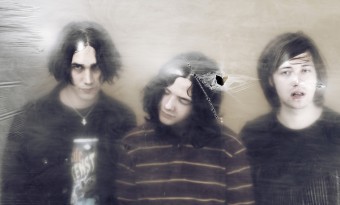 The Wytches bring their barnstorming brouhaha to Bristol, where The Epidemics and Nasty Little Lonely help them bring a heaving crowd to boiling point...
Read More