After seven years of making music together, Vivian Girls are putting the band to rest and going their own separate ways. Essentially composed of guitarist Cassie Ramone and bassist Katy Goodman, they reunited with their second and perhaps most iconic drummer, Ali Koehler, to play three farewell shows. I caught the first of these shows at the Church on York in LA on Friday, February 14th.

The break up Vivian Girls definitely feels like the end of an era; walking into the venue, I immediately felt like I had gone back in time to the days when noise bands were prevalent and played legendary shows at venues that have since shut down. I saw Vivian Girls a few years ago at Shoreditch Festival in London where Katy crowd-surfed while still playing bass and at the Echo in LA where they brought Tony Cadena of the Adolescents on-stage and played the song ‘Amoeba’ with him. I was expecting this show to provide me with crazy memories to cherish forever but unfortunately, I don’t have much to say about their set.

They opened with ‘Walking Alone At Night’ followed by ‘I Have No Fun’ and for a minute I thought they were just going to play Everything Goes Wrong all the way through. Their third song was ‘Wild Eyes’ though and the rest of the set was a mix of songs from all three albums. It felt like they were rushing through all of their songs as if they were just trying to get the show over with; Cassie seemed especially burnt out, and the song ‘Death’ was painful to listen to as I could hear no trace of emotion in her voice. The one song she did seem happy to play was ‘Lake House’. Katy and Ali were in better spirits, maybe because they both live in L.A. now so this was a home show for them. Katy even gave a bouquet of flowers to a random girl in the audience because it was Valentine’s Day and told us that we could all be her Valentine.

I will blame part of the reason that this show was mediocre on the circumstances. There was plenty of crowd-surfing and mayhem going on at the front of the stage but I was in the middle of the crowd where there wasn’t any action. The stage was lit up in a red haze and the band members basically just looked like shadows. During ‘Never Miss Me Again’ the lights turned off, leaving us to just listen in the dark until the red came back on halfway through the song. Katy eventually complained that they could not see and told everyone to hold up their cell phones so they could have more light. The sound was pretty bad too and the engineer was having trouble fixing the feedback that was going on.

Overall, I would say that the only thing that made this show memorable for me was the fact that it was the last time I will ever see them play live. I hope their Brooklyn shows are more fun since that’s where they got their start. If you weren’t able to catch any of these shows, you can still see Cassie, Katy, and Ali perform separately in their other bands, The Babies, La Sera, and Upset. 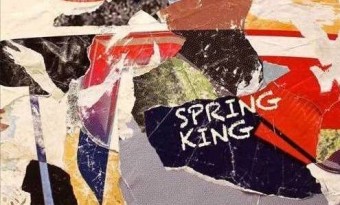 You'd expect March to be the perfect month to go and see a band called Spring King. And you know what? It is.
Read More