Without doubt the best intro to a music video so far this year, ‘Faded’ begins with rising rapper Lizzo stumbling through the Yuca Valley, California. Furrowed of brow and dusty of boot, she chances upon a biker bar and sits down for a jar opposite what looks like Steven Spielberg if he’d joined ZZ Top instead of the Director’s Guild. Incidentally, how good would it have been if Spielberg had been a Hell’s Angel? Just imagine: Easy Riders of the Lost Ark, Empire of the Sonny Barger, Really Angry-Looking Men in Black… so many missed opportunities.

Anyway, Spielbiker takes a look at Lizzo and amiably asks, “What’s your name?”. To which Lizzo’s response is: “IT’S THE L-TO-THE-I-TO-THE-Z-Z-O!” before launching into a verse so blistering it’s like she’s just shared a rose pipe with Eminem, Busdriver and Busta Rhymes. We’d already been pretty much won over by her last single, ‘Batches and Cookies’, but this just sealed the deal.

The rest of the video speeds by in a whirlwind of burning trolleys, beard-stroking and what generally looks like one hell of a party. In fact, the disorientating, drug-fuelled atmosphere is so potent that cameos from Har Mar Superstar and Macauley Culkin don’t even seem that out of place. Truly, Lizzo’s world looks like fun.

That world first formed in her birthplace of Detroit, although her real musical awakening occured in Houston where her family moved when she was 10. It was there that she witnessed the city’s prodigal daughters Destiny’s Child performing in a local Wal-Mart, an event which proved to be an inspiration – she became a member of various RnB girl groups in the aftermath.

Since then Lizzo has taken on a range of musical forms, playing in everything from an electro-pop duo to a prog rock band, even graduating from Houston University with a classical flute degree. Now based in Minneapolis (which would explain the Marijuana Deathsquads t-shirt she sports at one point) she even has a trap collective, GRRRL PARTY, on the side too.

The incredible thing about ‘Faded’, a furious, amped-up funk akin to Outkast’s ‘B.O.B. (Bombs Over Baghdad)’, is that you can hear elements of everything she’s learned along the way in just three minutes. OK, maybe not the classical flute, but hopefully that’ll make an appearance on forthcoming album LIZZOBANGERS, due out in April.

“Don’t tell us to slow it down, we won’t listen,” she warns on the song’s chorus. “We’re twenty-somethings and it’s twenty something… Rumours that the world’s gonna end don’t faze me – I’m-a get faded”. When you look at the current Cold War revival taking place in the Crimea, as the world slowly burns/floods/melts (depending what bit of it you’re clasping to), that seems an understandable response. At the end of the video, Lizzo collapses in the Californian dirt. We doubt she’ll be down for long. 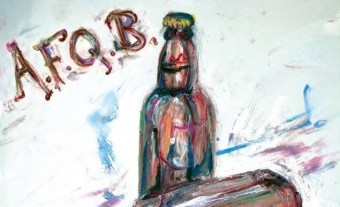 Too skint for new music? You've got no excuse these days, with this EP from The Last Skeptik and Illaman the latest to be made available for precisely zilch...
Read More