You know what makes most bands so boring? It’s when all the members like exactly the same music. There’s no room for unusual deviations or unexpected influences, because their influences never deviate. I used to DJ between bands at Nambucca in London during the brief period when Holloway Road became the epicentre of indie, back when Arctic Monkeys were permanently on the cover of NME (how times change!). Without fail, one band would reveal themselves to be slavish fans of the Sheffield band.

How could you tell? Well, because they sounded EXACTLY like them. Seriously, they might as well have just bought the guitar tab to ‘Everything You Say I Am…’ and relaunched as covers bands. They’d have earned more money if nothing else. And more than three people would’ve attended their gigs.

Anyway, the point is that disparate influences tend to lead to more interesting music, even if those elements aren’t audible in the final results. Brooklyn duo Lushes are a fine example. Singer/guitarist James Ardery grew up on Nirvana and Wu Tang Clan albums pilfered off his brother, and attended Fugazi shows at the age of 12 (the lucky bastard). Meanwhile, the music lying around drummer Joel Myers’ house wasn’t quite so hip; instead he nourished himself on his classical organist father’s Rachmaninoff and Bach collections.

It begins with the misleadingly-titled ‘Harsh’, which sees deft guitar harmonics resting atop a mellifluous synth bed (like a waterbed, but filled with delicious warm pads instead). “Harsh on my ears, that’s the way I like it,” claims Ardery, but there’s not much to rough your ears up here – it’s more like an aural rubdown.

Indeed, Lushes’ experimental bent initially resists curving into more violent territory. ‘One Right Word’ twists around a triple-time beat, eventually settling somewhere in between The Notwist and Oneida, before the noisier ‘Traffic’ suddenly shifts into a bizarrely brilliant coda that somehow shoves krautrock into opera. We’ll call it Krautera (actually, maybe not).

Things get even friskier when the gloriously fuzzy stoner riff of ‘Dead Girls’ barges in. It feels like Beak> shaking Om out of a coma, and makes me want to hurl bricks at ice statues in slow motion, howling at broken shards of frozen angels like a demented hell-beast. A particular highlight is when some weirdly slowed-down vocals about zombies warp into a jerky meltdown of a guitar solo. Smashing.

A shifting exercise in repetition follows, with the ten minute ‘Feastin’ slipping into a dreamlike piano swoon halfway through, before a slurred vocal loop builds things back up alongside some thumping drums. Put simply, it’s what I hope the new Liars album sounds like (indeed, the background mumbling does sound a little like it could belong to Angus Andrew).

The final track, ‘Garden’, also sees abstract, circular sampling being secreted into a more solid structure. It’s the sort of music that might emerge from your head when staring at a puddle in a deserted park on a grey afternoon (probably shortly after a break-up). It’s a beautifully bleak way to bring proceedings to a close.

It marks another excellent release from New York’s Felte, current home of PVT, ERAAS and The Tower of Light, and a label that has yet to put a foot wrong. Certainly, not many bands this year will cover changeable musical terrain like this with such dexterity. To illustrate this, three different people asked who was playing when I stuck the album on in the office, assuming each track was by a different band.

‘What Am I Doing’, Lushes ask. I don’t know, but for god’s sake don’t stop doing it.

Angel Olsen - Burn Your Fire for No Witness 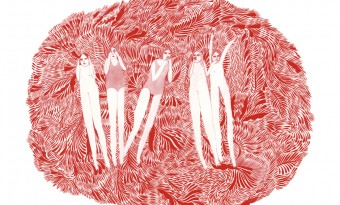 Angel Olsen and her remarkable voice (and band) returns, with a spellbinding, genre-hopping new album that might just help "unfucktheworld"...
Read More