Opening with ‘How Am I Meant To Know’, we’re greeted with the signature angsty tones of Vek. The lyrics loop the title of the track, and it’s a warm welcome back. But it’s an opener, and an opening track is all it is. Thankfully we’re quickly taken into ‘Sherman (Animals In The Jungle)’ which sees Tom Vek on full form and in full glory. It’ll probably remain on my iPod for quite some time, just like previous smashers ‘C-C (You Set The Fire In Me)’ (perhaps brackets are his secret?), ‘Nothing But Green Lights’ and ‘Aroused’. As soon as the synth kicks it off, you know you’re in for a good ride. Then the drums. Oh, the drums. Classic Vek.

The lyrics shoot off here, there and everywhere. This is something throughout the album that perhaps is not honed in as much as some would like, but then that’s part of Tom Vek’s appeal, right? Some listeners will see this as the highlight and be content, but the rest of the album is full of more treats. Maybe less obvious treats, but this isn’t an instant album. We want it all too quickly these days (more on that NEVER), but as we venture into track 3, ‘Broke’, we’re given a predominately instrumental track. No, there’s no hook (come on), but it’s the combination of production, layering, the knowing when to drop certain elements and take things back that allow this one to be damn sweet and catchy.

‘Pushing Your Luck’ provides the listener with a hook, simple and up front. I’ll be singing it drunk in no time. The synth loop throughout the track is infectious and provides a strong backbone to accompany the drums; it’s Tom Vek entering single territory despite it verging on 5 minutes. Next? ‘Ton Of Bricks’ – yes, if the bricks are made of sponges. Uh? It’s a squelchy track and plods along nicely. No, listen to it, it’s a grower, but like a lot of the tracks here feels a little lacking in the execution department.

As we hit the halfway mark, ‘Trying To Do Better’ puts you in somewhat of a false sense. Tom Vek sings “I know, I know I will always want more,” and it got my mind to thinking. Then I realised, ah, this is probably where I’d be flipping the vinyl over. Or at least I’d like to think this was Tom Vek’s thought process behind sticking ‘Trying To Do Better’ there, but then comes ‘The Girl You Wouldn’t Leave For Any Other Girl’, and we’re given the only acoustic track on the album. And I wouldn’t particularly want to flip my vinyl over to start side two with this. It follows the same suit as the album opener and the lyrics are just the title being repeated, but this time Vek is straining his voice.

It’s just out of place really. Meh. I don’t have the vinyl and my five minute Google search didn’t bring up where side one’s cut off is, so the last paragraph could be completely irrelevant (Y).

‘A Mistake’ is another strong instrumental – I really do enjoy what Vek does throughout the album instrumentally – but it’s accompanied by another set of fairly weak lyrics. Closing track ‘Let’s Pray’ redeems itself and it’s a track that could have been bumped up the track-listing in all fairness, bulking out the solid run of tracks in the first half of the album. Because, quite frankly, it doesn’t shout ‘ender’ as much as ‘Trying To Do Better’ does.

The album may see Tom Vek stay in the same gear, but I’m not sure I’d like to see Tom Vek go down into 2nd gear, or take it up to 6th gear for that matter. He has his signature and there’s no real reason to mess with it. The production is crisper and more pleasing on the ears than on previous albums, a good sign for future Vek material. As with his previous two albums there are weak points, but these are accompanied by some big hits (or at least they should be considered that by a larger audience). Maybe the world would be a better place if clubs replaced ‘Mr Brightside’ or ‘Chelsea Dagger’ with Tom Vek’s ‘Aroused’? You know, when they enter their token ten minutes of indie classics…

Anyway, sit with Luck and you’ll find a handful of gems that sit up on the top shelf with lead track ‘Sherman’. Just give it time. 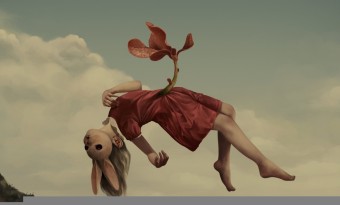