It’s always refreshing to see someone try something new with a music video, so kudos to Canadian producer Tommy Kruise for turning the clip for ‘Hers’ into a mini-documentary that demonstrates just how therapeutic music can be.

The video follows Bogdan Chiochiu, a Romanian-born Asperger’s sufferer whose day-to-day life in a Montreal mental institute revolves around listening to music and recording obscure radio broadcasts. The camera follows Chiochiu around the institute, where he is rarely seen without his earphones in, even stopping to play some tracks to the plants in the greenhouse. According to director Martin Pariseau, his obsession with music needed no exaggeration on camera: “Bogdan speaks six languages, knows more than anybody you know about all kinds of music and is the realest person I know. He’s also obsessed with radio waves, always looking to catch a show from Morocco down to Venezuela from his tiny room”.

It’s no surprise that he’s a fan of Tommy Kruise then, whose watery, chopped ‘n’ screwed track washes over the film beautifully. “Music is both my biggest passion and my biggest escape,” Chiochiu elucidates. “It is the thing that takes me through the day, in a situation where I’m not free at all”. His enthusiasm, splendidly framed by Pariseau and soundtracked by Kruise, is not only infectious but thought-provoking. No matter how bleak the circumstances, the power of music to help people survive cannot be underestimated.

The death last week of Alice Herz-Sommer, the world’s oldest Holocaust survivor, also highlighted this. An accomplished musician, she played in concerts in the Terezin concentration camp where she was incarcerated, as part of the camp orchestra. “These concerts, the people are sitting there, old people, desolate and ill, and they came to the concerts and this music was for them our food,” she explained for a documentary about her life, The Lady in Number 6: Music Saved My Life.

“Music was our food. Through making music we were kept alive”.

In ‘Hers’, Bogdan Chiochiu, Tommy Kruise and Martin Pariseau have helped remind us of this extraordinary power. Not bad for a music video. 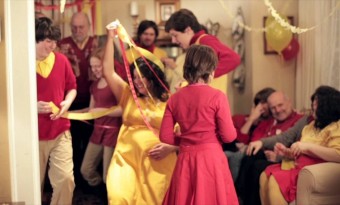 Happy Jubilancy Day everyone! Huh? What do you mean you don't know what Jubilancy Day is? Stick Liam Finn on the stereo, grab a tomato, and get stuck in...
Read More