In the first (and in all probability last) of a new album reviewing concept, we present a poetry-based response to the latest album by Darren J. Cunningham, aka Actress.

Why poetry? Er, good question.  I personally find 99% of poetry tedious at best and repellent at worst, and would rather dunk my eyeballs into a bottle of insecticide than have them glaze over after a metrical assault from Andrew Motion or Carol Ann Duffy. Nope, apparently this is just what happens when you attempt to review an album of haunting, fractured techno after a chronic bout of insomnia. The poems were written in their entirety during a single play of each track, before being tidied up afterwards (I had listened to the album several times beforehand, mind).

If you want some, heaven forbid, actual information about the album, we recommend checking out Rory Gibb’s interview with Cunningham on The Quietus here. Or take a look at the press release, which, appropriately, turns out to basically be a poem itself. For our money, ‘Ghettoville’ is the best album of its type since last year’s Huerco S. LP, and the most cohesive and affecting Actress record yet. If it does turn out to be the record he retires that pseudonym with, it’s a fitting way to bow out.

Anyway, on with these bastard poems.

Passed out cold on the overground, perennially
Missing my stop, determined to delay alighting.
Eventually blinding footsteps will shake my shoulders,
Boot me off, body flying through the air, connecting
With the ground in several predetermined places
As everything starts to dribble away.

Rail track static as the carriage rolls backwards
Two heavy, hooded eyes scour the back of my head
Gravity waiting like a bully in an alley
Chirping birds yet to be scared into flight by the swift
Heavy smack of my skull that is surely impending
Surely impending and way overdue.

Sell illegal electricity on furious streets
Fuel your humming engine with liquid cannon fodder
Ignore the raw red thumbs pulsating in the streetlights
Breathe garbled life into a brittle plastic nightmare
Watch it disintegrate, feel the dust run through your hands
Gently collect it all in a fraternal dishcloth
Inhale deeply until you pixelate your vision
Watch your nose run in 256 simultaneous colours.

A dead snake coiled around
A clutch of eggs in your stomach
Pulsing with light
Making a dull, red flash
Visible through the skin
Wrapped
Restrictively
Around your abdomen.

An attempt to regulate
Your heart’s sick thud
With bursts of electricity.
Or possibly just to make it
Stop.
It’s hard to tell
The laughter in the room
Is drowning everything out.

Jackdaws beak open your eyes,
Two of them
Stretching open each lid
While a third peers
Down the cylindrical crevice
Of your hyaloid canal
Looking for tiny worms
Dwelling
Inside.

In your stomach,
A stifled cackle.

Cars crushed from every conceivable angle.
And not into neat, stackable cubes either.

Everyone you’ve ever loved groans in stereo
Distorted by the shudder of loose connection.

Shot through with green light
Smoky trails where the
Holes should be.
Let them roll away.

An empty club where everyone’s dancing.
Grab your partner by the soul
And gently be enveloped.

Sausages cooked on an upturned bin lid
Atop a kerosene and dead dog fire.
Slicing the fat off every passing hour
And slipping it into the spitting mass.

Sure it’s organic – it’s made of organs.
Impatience builds, teeth chatter, fingers tap.
Some people are getting high off the fumes
Lips drooping, thoughts slowly turning to bone.

Each one is turned mechanically until
They simply blacken and disintegrate
But who now is aware enough to care?
Those still awake can sip the blackened juice.

Dregs devoured by the dregs.

One man gets his wish and is expanded to the size where he can smash buildings like fairground gophers.
Unfortunately his arms have been replaced by centre-jointed snooker cues,
So he just sits there and taps morosely at the windows
While the inhabitants cower inside.

Instead another man is gifted the colossal limbs, but they merely weigh down the rest of his body.
He’s doomed to remain inside a mechanic’s waiting room for the rest of his days,
The odd crisp flicked into his mouth,
His monstrous muscles crudely upholstered and disguised as lumpen benches.

Two torsos grinding against each other
Just outside the gates of heaven.
If they carry on with this  behaviour
They’re never going to get in.
Elsewhere in the queue they hand out flyers
Discreetly slipping pills to punters, each
stamped with an angel’s folded wing,
Accepting crumpled good deeds in return.
Desperately trying to conceal gurns
Unaware their histories are being
Sneakily inched from their pockets
As the steel pink clouds begin to slide up
And the divine thump gets louder

Standing, dizzy,
Balanced on top of the spike
Birds hanging static in the air around me
Radio waves visible
Refracting from roof to roof.

Windows occasionally open and
Belch out billious clouds of black smoke
Slowly filling the sky
Until it becomes a basement,
Wrappers and butts on the floor

And the stale taste of something that once scuttled.
An elevator in one corner,
A frail yellow light trying to barge
Through the tiny crack between the doors
Pounding soundlessly, on and on.

When we put it to a vote
As to who would be chosen
To be our adventurer
Through the inky flaps of time
No one expected a chipped cue ball
From Sidcup
To emerge victorious.

But there you go.

A snooker ball tossed into a wormhole
Farting its way into the future.

Turn this rave into a gaseous cloud
And trick your mates into inhaling it.

Last night’s chicken has come alive and is playing slow jams in your gut,
Sensually grooving with some half-chewed pepperami that you swallowed
With a retch, seven years ago.

The lights are low, my masticated lover.

And so we spin backwards
Rotating like a loose-leafed rolodex
The business cards of the lost
Souls knotted between bars
Spirits housed in cylinders
A knowing nod to transcience
A pantheist embrace
A snoot cocked at karma
A final spiral
A rising stylus. 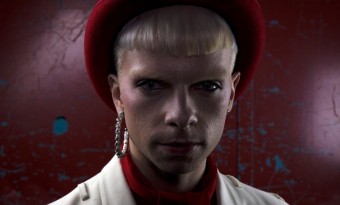 You might not like it when Facebook suggests you listen to Jake Emlyn (pictured), but surely there are better ways to respond than this?
Read More